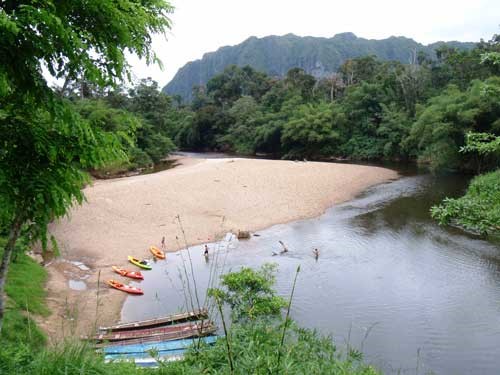 OVER the last couple of weeks, we had seen quite a bit of rain, and in some instances, very heavy downpours.

Showers have provided much needed relief for thousands of people who experienced acute water shortage between June and July.

However, this may just be a temporary relief as water scarcity will continue to stalk the state and the country as a whole.

Mankind’s insatiable thirst for water and deforestation activities seems to have pushed our most precious natural resource – water – to the brink.

Bodies of water, stressed by human consumption and forest clearing, are disappearing quicker than imagined.

Many of the world’s largest rivers, including the Yangtze, the Ganges and the Salween in Asia, the Danube in Europe and the Rio Grande in North America have become victimised by water demand and development – that they are in the process of drying up. Rivers in Sarawak are not spared.

There are no studies to show the levels of rivers in Sarawak have fallen but a series of newspaper reports between June and early August appeared to have indicated so.

What are the causes?

Three main factors lead to this phenomenon, according to Deputy Minister of Natural Resources and Environment Datuk Seri Dr James Dawos. They are El Nino, clearing of forest in the water catchment areas and impact of climate change.

Dawos said the absence of rain due to El Nino had affected the water level in most rivers in Malaysia, including Sarawak. “We are now in El Nino which may cause extensive drought and absence of rains. “When there is no rain, of course river level will reduce or even dry up,” he added.

El Nino events are reported to be occurring irregularly – about every two to seven years and may last from 12 to 18 months.

The event begins with the weakening of the prevailing winds in the Pacific and a shift in rainfall patterns. It is associated with extreme weather – floods and drought – in countries surrounding the Pacific and much further afield.

During the period, prolonged dry periods may occur in Southern Africa, Northern Australia and Southeast Asia – which means Sarawak too is affected.

According to reports, the current increase in temperature and drought conditions could persist through to 2015.

Dawos, who is former State Environment Advisor, said like other parts of the world, the availability and quality of water in Sarawak are also threatened more and more by the clearing of forests in the water catchment areas.

He noted that forested catchments supply a high proportion of water for domestic, agricultural, industrial and ecological needs in both upstream and downstream areas.

He said under any hydrological and ecological circumstance, forests are the best land cover to maximise water yields, regulate sustainable flows and ensure high water quality.

“Conserving forest cover in upstream watersheds is deemed most effective in enhancing water availability not just for domestic but also agriculture and industrial uses.”

Dawos explained that deforestation disturbed the water cycle and trees were an important part of maintaining the state’s water resources.

By drawing up groundwater through their roots, then releasing it into the atmosphere through their foliage, trees play a significant role in the hydrologic cycle.

In addition, their roots also help to create large conduits in the soil which help water to infiltrate through the ground area; their trunks and stems help to stop surface runoff which contributes to erosion, and a large proportion of precipitation is intercepted by their leaf canopies and then re-evaporated back into the atmosphere.

Furthermore, the leaf litters and other organic residues from trees help provide a ground covering and increase the soil’s capacity to store water.

Trees literally control the amount of water available in the atmosphere, the soil or even in the groundwater.

Dawos, a trained specialist in forestry and environmental science, said areas that had been cleared of trees could not retain as much moisture in the ground and atmosphere and this very often led to a drier climate.

He added that forests transport large quantities of water into the atmosphere through plant transpiration, hence replenishing the clouds and instigating rain that maintains the forests.

He noted that huge amounts of carbon dioxide were released into the environment, part of which came from Malaysia, due to industrial activities.

He said global warming and climate change posed a threat to water supply.

“Longer hot and dry periods will eventually result in low water level or rivers drying up,” he added.

Naturally, the amount of water flowing through a river is governed by two main sources – the source from which it takes its headwater and the level of precipitation in the area around it.

While a river that is constantly fed by large bodies of water may flow continuously, the levels of other rivers may lower considerably, or even dry up completely, during periods of low precipitation.

Some rivers can also dry up if objects such as dams are constructed to divert their flows in a different direction.

In some areas, rivers do not flow at all unless heavy rains have fallen, providing them with a temporary water source.

Dawos disagrees with suggestions that construction of dams are killing some of the rivers in the state.

He said dams actually helped control the flow of water and flood.

“When there is a dam, the government has to gazette the water catchment areas to ensure sustainable supply.”

To prevent rivers drying up, Dawos pointed out that water catchment areas should remain strictly untouchable while forest clearing should be reduced to prevent global warming and climate change.

A key challenge, faced by the state authorities now and in the near future, is to maximise the wide range of multi-sectoral forest benefits without detriment to water resources and ecosystem function.

To address this challenge, there is an urgent need for a better understanding of the interactions between forests or trees and water, for awareness raising and capacity building in forest hydrology, and for embedding this knowledge and the research findings in policies.

Similarly, there is a need to develop institutional mechanisms to enhance synergies in dealing with issues related to forests and water as well as to implement and enforce action programmes at state levels.

Everyone agrees water is one of the most important resources obtained from forests. It is vital for all living things. Careful forest management is necessary to ensure that our present and future water needs can be met.

Forests determine the quantity, rate and quality of water which flows into streams and hence into dams or reservoir.