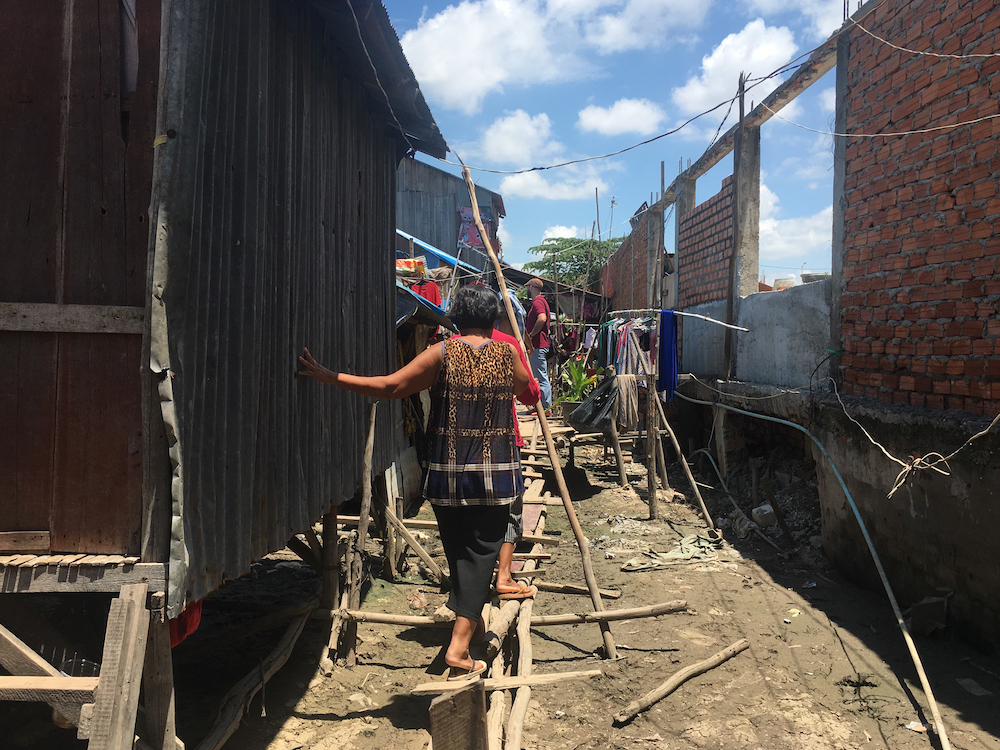 A woman walks on a makeshift bridge of wooden planks and poles in an informal settlement at the edge of Boeung Tompoun in Phnom Penh May 27, 2019. — Thomson Reuters Foundation/Rina Chandran pic

Lay Sremeth and her family have lived on a narrow stretch of land by Phnom Penh’s Boeung Tompoun lake for three decades, fishing in its water and growing rice on its bank.

But shortly after authorities approved filling in parts of the lake with sand and mud 10 years ago to build malls and apartments, they could not fish or farm anymore.

Now, with just a few swampy areas left, Lay Sremeth and her neighbors fear to lose their homes as they do not have titles.

A giant commercial complex under construction already dwarfs the modest wood and tin homes of the community of more than 60 families, and flooding has increased during the rainy season, damaging their homes, Lay Sremeth said.

“There was just empty land when we moved here, and we could make a living easily and get enough food. But now we have to work in factories and drive tuk-tuks, and buy food,” she said.

“We have lived here for so long but we cannot feel secure, knowing we can be evicted any time,” she added.

Cambodia is extremely dependent on its lakes and wetlands, with nearly half the population working on its seasonally inundated land, and relying on the rice and fish it provides, says conservation group Wildfowl and Wetlands Trust (WWT).

But as the country expands quickly, space is at a premium. In the last 15 years, about half the country’s wetlands have disappeared, according to WWT.

Nowhere is this more apparent than in the capital Phnom Penh, where 15 of 25 lakes have been filled in, and others partly filled or earmarked for reclamation, according to land rights organization Sahmakum Teang Tnaut (STT).

“Those who live by water bodies are particularly vulnerable, as they are less likely to have a title or get compensation when evicted,” said Isaac Daniels, a research advisor at STT, which estimates that dozens of the 1,200 poor families around the lake have been evicted.

“Many have lived there for decades, but are victims of the unplanned development and so-called beautification of the city.”

Authorities say reclamation is necessary to create much-needed infrastructure in the city.

“Some relocations are necessary when the land is developed,” said government spokesman Phay Siphan.

“Anyone who is a legal resident and has resided in a place for a while can apply for a title. There is a process, and we will grant the title after verification,” he said.

Just over a fifth of Cambodia’s 16 million people live in cities, according to the World Bank, compared to an average of nearly half in the rest of Southeast Asia.

The country’s low urbanization is partly due to the massive forced relocation of people to rural areas under the Khmer Rouge in the 1970s, according to historians.

The deadly regime also destroyed the nation’s property records to establish a form of communism, which has led to disputes over land ever since.

With growing investment in cities such as Phnom Penh, more migrants are moving in from rural areas in search of jobs.

Situated on the banks of the Tonle Sap, Mekong and Bassac rivers, Phnom Penh is already highly vulnerable to floods, particularly in the rainy season from June to October.

The filling in of lakes “exacerbates the city’s existing drainage problems, and appears to take place without full consideration of the environmental impacts,” the World Bank said in a 2017 report.

At the same time, the filling of wetlands and vacant green sites for construction in Phnom Penh and other cities is causing increased flooding, said Diane Archer, a research fellow at the Stockholm Environment Institute in Bangkok.

Ponds and lakes help reduce and slow water runoff, and are key to flood prevention, she said. They also drive other benefits such as groundwater recharge, cooling, and better air quality.

“The reality of climate change means we should be taking a long-term view in urban development: it’s easier to preserve existing wetlands than to try and retrofit them into a built-up area where land is at a premium,” said Archer.

Cambodia’s Hun Sen-led government began courting foreign investment in the 1990s to spur the economy and boost incomes. That paved the way for large economic land concessions for agriculture and mining.

Hundreds of ethnic Vietnamese are at risk of being removed from the Tonle Sap lake, where they have lived for decades.

In Phnom Penh, a city of about 1.5 million people, thousands of families have been evicted for development projects, particularly around waterways, human rights groups say.

More than 4,000 families were evicted in 2007-08 from their homes around Boeung Kak — “boeung” is lake in Khmer — as it was filled in to build a business district.

More than a dozen residents were arrested for protesting. Tep Vanny, the most high-profile of the protesters, was sentenced to two-and-a-half years in jail, and released last year after a royal pardon.

But evictions have continued, despite a law that gives anyone who has lived in a property uncontested for at least five years the right to apply for a land title, said Cheap Sotheary, a provincial coordinator with land rights group Adhoc.

“People in the informal settlement are often not aware of their right to a title, or the application process. Sometimes authorities do not give them permission to apply if the area is earmarked for redevelopment,” she said.

“Even those who apply are often denied, and even those with a title are not always safe from eviction,” she added.

About 13 communities are affected as the 2,600-hectare Boeung Tompoun is filled in, according to STT.

A few miles from Lay Sremeth’s home, at least one community is hopeful, even though they cannot fish or farm any longer.

Khut Chandara and about 380 other families were promised titles for their homes by Prime Minister Hun Sen during his election campaign last year.

Since then, officials have measured their plots, said Khut Chandara.

“We are very happy that we will finally get titles. With the titles, we cannot be evicted, so we can build better homes, and we will have security and peace of mind at last,” he said.