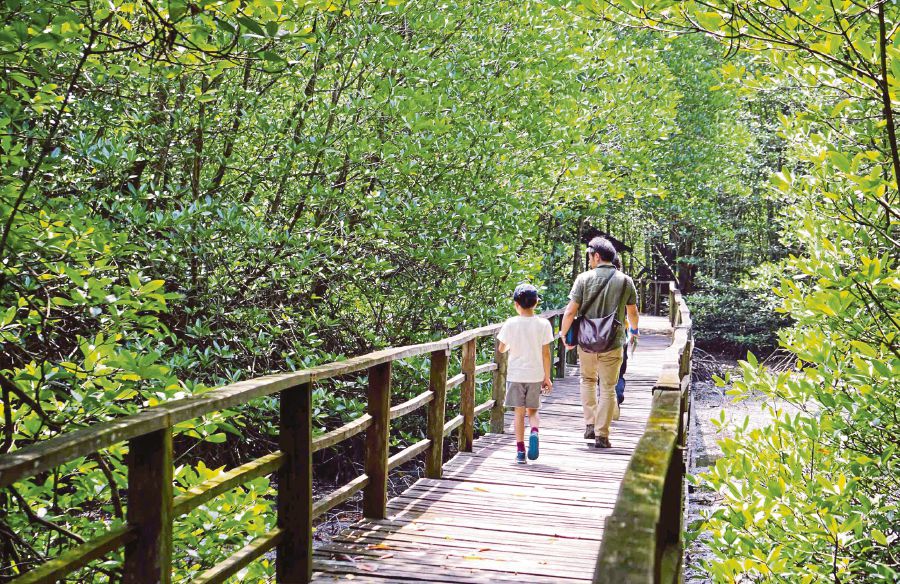 There must be careful consideration when carrying out tourism activities and development work near mangrove areas, especially those designated as Unesco sites. FILE PIC

Today is the International Day for the Conservation of the Mangrove Ecosystem.

This is the third year it is being celebrated after it was proclaimed by the United Nations Educational, Scientific and Cultural Organisation (Unesco) at its 38th General Conference in Paris on Nov 6, 2015.

Mangroves are established mainly on sheltered tropical and subtropical coastlines.

Although mangroves cover one percent of the earth’s land mass, they play important roles and contribute significantly to global sustainability.

Maintaining water, nutrient and climatic cycles are just some of their prominent functions.

Scientists have recognized mangroves as the most efficient ecosystem to sequester atmospheric carbon, a natural process which becomes one of the best mechanisms — our best weapon — to counter global warming and climate change. This is the central role performed by mangroves.

The importance of mangroves is globally recognized and there are international efforts in place to push for their protection and conservation.

One of these efforts is through the Ramsar Convention.

Malaysia is a proud party to the convention with seven designated sites, of which six are mangrove forest sites.

The only Unesco conservation site involving mangroves in Malaysia is at the Langkawi Global Geopark.

On top of these international efforts, mangroves in Malaysia are being protected and conserved through the gazettement of forest reserves under the National Forestry Act or the National Parks Act.

Other mangrove sites are being protected together with the delineation of marine parks under the National Fisheries Act and state laws such as Sabah’s Parks Enactment.

Being recognized as a site of international importance is an extraordinary privilege.

It opens up tremendous opportunities for an area to be protected and preserved with strict regulations and guidelines without compromising the cultural use by local communities.

The recognition of a site by international conventions usually demands that comprehensive plans and resource management be undertaken by local authorities, with the participation of local communities for the maintenance and protection of the site’s distinctive property.

The recognition also brings multiple benefits and provides outstanding prospects. It is a remarkable identity that can draw international attention, a brand name with a huge global fan base.

The branding triggers the birth and development of a massive tourism industry and all other complementary industries which contribute to the country’s socio-economic development.

However, without a comprehensive governance framework and careful management and control, development would grow at the expense of the environment.

A steady increase in the number of tourists has taken its toll on the environmental integrity of the mangroves in Malaysia.

Catalysed by tourism activities, anthropogenic impacts are affecting the health and resilience of the ecosystems in our mangrove ecotourism sites.

One identified anthropogenic impact is the tour and cruise boats that frequent the mangrove sites.

These boats, depending on the speed they travel, produce waves that can cause erosion of the river banks.

The heavy scouring of sediment will eventually result in the uprooting and loss of mangrove trees.

Consequently, the channels become wider and the water becomes shallower, altering the hydrology and the morphology of the rivers and estuaries.

Changes in the physical characteristics of the mangrove forests will negatively affect the ecosystem, including protection from coastal and climatic hazards.

More environmental issues associated with mass tourism are expected to occur, ranging from waste and litter to run-offs and leachate, which may pollute the estuarine waters and affect the health of marine life.

Careful consideration must be given when carrying out tourism and development activities near mangrove areas.

It is crucial to be equipped with integrated and effective measures to mitigate these risks, especially mangrove conservation sites designated as Unesco sites.

As the third largest country with mangrove forest cover, Malaysia’s mangroves play a significant role on the global stage.

Each mangrove tree is the main actor in the climate change drama. As a stakeholder and global citizen, Malaysia must invest in conservation efforts to protect its mangroves and natural environment for the benefit of current and future generations.