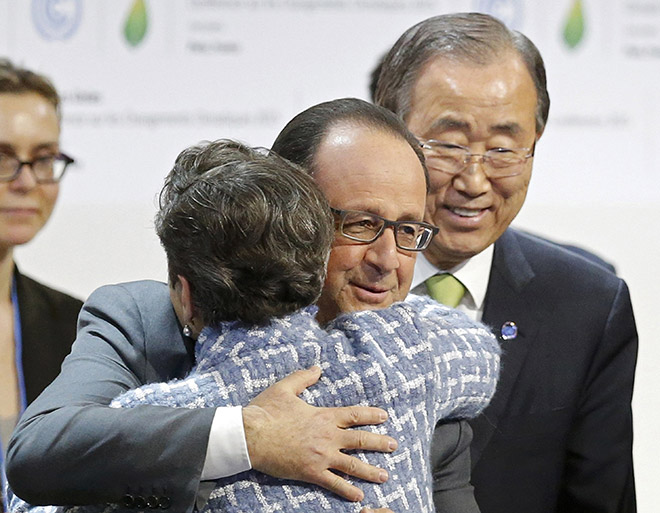 LE BOURGET, France: Cheering envoys from 195 nations on Saturday approved a historic accord in Paris to stop global warming, offering hope that humanity can avert catastrophic climate change and usher in an energy revolution.

French Foreign Minister Laurent Fabius ended nearly a fortnight of grueling UN negotiations on the outskirts of Paris with the bang of a gavel, marking consensus among the ministers, who stood for several minutes to clap and shout their joy, with some shedding tears of relief.

“I see the room, I see the reaction is positive, I hear no objection. The Paris climate accord is adopted,” declared Fabius, the president of the talks.

The post-2020 Paris Agreement ends decades-long rows between rich and poor nations over how to carry out what will be a multi-trillion-dollar campaign to cap global warming and cope with the impact of a shifting climate.

With 2015 forecast to be the hottest year on record, world leaders and scientists had said the accord was vital for capping rising temperatures and averting the most calamitous effects of climate change.

Without urgent action, they warned, mankind faced increasingly severe droughts, floods and storms, and rising seas that would engulf islands and coastal areas populated by hundreds of millions of people.

“The Paris agreement establishes the enduring framework the world needs to solve the climate crisis,” US President Barack Obama said.

“We came together around the strong agreement the world needed. We met the moment.”

The crux of the fight entails slashing or eliminating the use of coal, oil and gas for energy, which has largely powered prosperity since the Industrial Revolution.

The burning of those fossil fuels releases invisible greenhouse gases, which cause the planet to warm and disrupt Earth’s delicate climate system.

Ending the vicious circle requires a switch to cleaner sources, such as solar and wind, and improving energy efficiency.

Some nations are also aggressively pursuing nuclear power, which does not emit greenhouse gases.

The Paris accord sets a target of limiting warming of the planet to ‘well below’ 2.0 degrees Celsius (3.6 Fahrenheit) compared with the Industrial Revolution, while aiming for an even more ambitious goal of 1.5C.

To do so, emissions of greenhouse gases will need to peak ‘as soon as possible’, followed by rapid reductions, the agreement states.

The world has already warmed by almost 1C, which has caused major problems in dry developing countries, according to scientists.

Some environmentalists said the Paris agreement was a turning point, predicting the 1.5C goal would help to doom the fossil-fuel industry.

“That single number, and the new goal of net zero emissions by the second half of this century, will cause consternation in the boardrooms of coal companies and the palaces of oil-exporting states,” Greenpeace International chief Kumi Naidoo said.

Developing nations had insisted rich countries must shoulder the lion’s share of responsibility for tackling climate change as they emitted most of the greenhouse gases since the Industrial Revolution.

The United States and other rich nations countered that emerging giants must also do more, arguing developing countries now account for most of current emissions and thus will be largely responsible for future warming.

On the crucial financing issue, developed countries agreed to muster at least US$100 billion (92 billion euros) a year from 2020 to help developing nations.

However, following US objections, it was not included in the legally binding section of the deal.

Ahead of the talks, most nations submitted voluntary plans to curb greenhouse-gas emissions from 2020, a process billed as an important platform for success.

But scientists say that, even if the pledges were fully honored, Earth will still be on track for warming far above safe limits.

In an effort to get countries to scale up their commitments, the agreement will have five-yearly reviews of their pledges starting from 2023.

Nations most vulnerable to climate change lobbied hard for the wording to limit warming to 1.5C.

Big polluters, such as China, India and oil-producing giant Saudi Arabia, preferred a ceiling of 2C, which would have enabled them to burn fossil fuels for longer.

“However, this does not prevent us from marching historical steps forward,” he said.

“This indeed is a marvelous act that belongs to our generation and all of us.”

Tuvalu, a Pacific island nation of about 10,000 people at risk of being submerged by rising oceans, celebrated.

“We have saved Tuvalu, and in doing so we have saved the world,” Tuvalu negotiator Ian Fry said.

Hi llary Clinton, the Democratic Party’s front runner for the US presidential race, noted, however, that “the next decade of action is crucial”.

“If we do not press forward with driving clean energy growth and cutting carbon pollution across the economy, we will not be able to avoid catastrophic consequences.” — AFP

Highlights of the proposed UN climate accord

Following are key points in the Paris Agreement:

The agreement identifies climate change as ‘an urgent and potentially irreversible threat to human societies and the planet’. It notes “with concern” that countries’ existing pledges to curb greenhouse-gas emissions would fail to meet targets for curbing planetary warming.

The purpose is to hold global warming to ‘well below’ two degrees Celsius (3.6 degrees Fahrenheit) over pre-Industrial Revolution levels, and to strive for 1.5C (2.7F) if possible.

The world will aim for climate-altering greenhouse gas emissions to peak ‘as soon as possible’, with ‘rapid reductions’ thereafter. By the second half of this century, there must be a balance between the emissions from human activity such as energy production and farming, and the amount that can be captured by carbon-absorbing ‘sinks’ such as forests or carbon storage technology.

Deve loped countries, which have polluted for longer, should take ‘the lead’ by taking on absolute emissions cuts. Developing nations which still need to burn coal and oil to power growing populations, are encouraged to enhance their efforts and ‘move over time’ to cuts. Rich countries are required to provide support for developing nations’ emissions cuts.

In 2018, two years before the agreement enters into force, countries will take stock of the overall impact of what they are doing to rein in global warming, and revisit their carbon-curbing plans in 2020. Some countries had submitted their first round of targets until 2025, and others until 2030. Once the agreement takes effect, the collective impact of countries’ efforts will be reviewed at five-year intervals from 2023.

The outcome will inform countries in “updating and enhancing” their pledges.

Developed countries ‘shall provide’ funding to help developing countries make the costly shift to green energy and shore up their defenses against climate change impacts like drought and storms. Funding must be scaled up, and the agreement says rich nations must report every two years on their finance levels — current and intended.

Moved from the legally binding core agreement to a separate non-binding ‘decision section’, the document refers to the 100 billion a year that rich countries had pledged to muster by 2020 as a ‘floor’.

Low-lying island nations and poor countries most at risk from climate change-induced sea level rise and other impacts, have won recognition of the need for ‘averting, minimizing and addressing’ losses suffered.