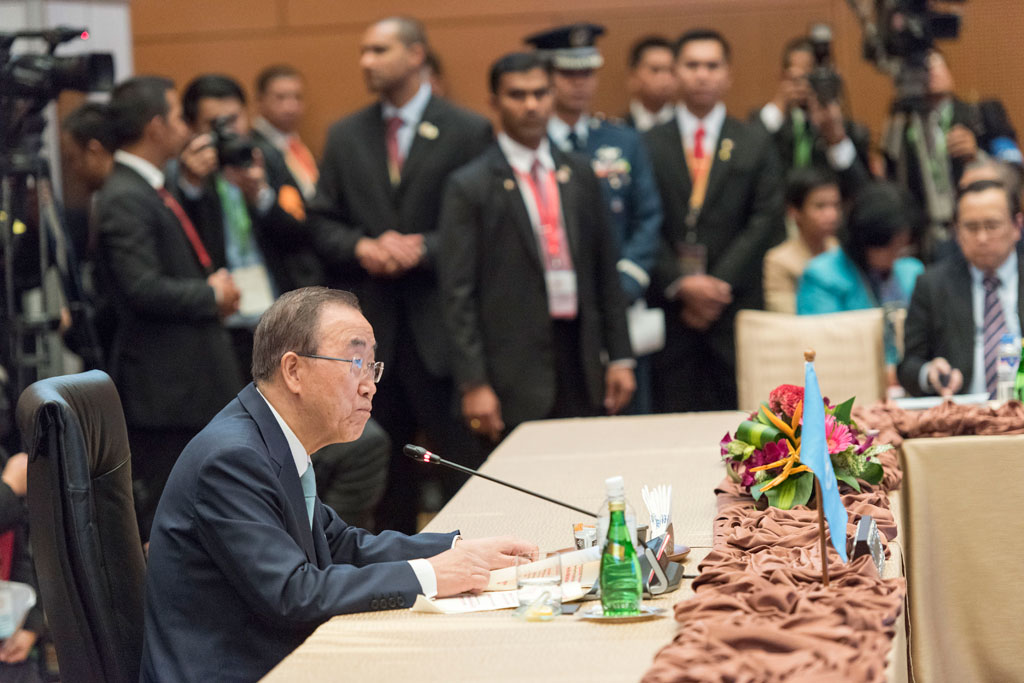 “2015 is a momentous year for the United Nations, ASEAN and our partnership. The world has now adopted visionary Sustainable Development Goals to end poverty by 2030. In just eight days, the Climate Change Conference will open in Paris to adopt a meaningful new agreement. ASEAN is becoming one community,” Ban said in his remarks at the seventh ASEAN-UN Summit in Kuala Lumpur, Malaysia.

The UN chief underlined the role of the Southeast Asia in helping build the recently adopted ‘historic’ Sustainable Development Goals (SDGs) and congratulated the leaders of signing the ASEAN Community Vision 2025 earlier in the day.

“The Vision 2025 should be carried out in tandem with the SDGs. Action should be complementary to transform the lives of millions of people living in poverty. The United Nations expects each and every Member State to implement the SDGs through all possible domestic measures – legislative, administrative or economic development plans. This is fully in line with the ASEAN Community Vision,” said Mr. Ban.

He further applauded the goals of the new initiative of ‘fostering a truly people-oriented, people-centered and rules-based ASEAN’ and stressed that to sustainable development can only be achieved with appropriate climate action is undertaken.

“Now the world has a chance to steer towards a low-carbon, climate resilient future. The Paris Climate Change Conference has already generated enormous momentum. More than 166 countries, including a majority of those in South East Asia, have submitted national climate plans. Their targets would keep temperature rise to 3 degrees Celsius,” said Mr. Ban applauding the progress and stressing on keeping global temperature rise below 2 degrees.

Additionally, he emphasized that to achieve for a successful results from the conference in Paris, also known as COP21, durability, flexibility, solidarity and credibility must be inculcated in the discussions.

The Secretary-General urged that the discussions must hold a long-term vision, balance the leadership role of developed countries and responsibility of developing countries, fulfill pledges and provide sufficient resources to the vulnerable communities and measure, monitor and report progress.

“I call on ASEAN leaders to play a major role in supporting global climate action. Your countries are facing significant environmental stress – but they can potentially realize massive benefits of a low-carbon economy. Tell your negotiators to compromise for consensus. Look beyond national horizons and work in the common interest for our planet and all people,” said Mr. Ban.

Speaking about human rights, Mr. Ban highlighted that a people-centered approach will aid in ending discrimination.

”This is especially true for the world’s more than 60 million people who have been forced to flee their homes. Next year’s World Humanitarian Summit will be an important milestone. It should generate strong global support for bold changes in humanitarian action,” said the UN chief.

Further, he announced his plans to convene a high-level summit on managing large-scale movements of migrants and refugees, a day before the opening of the General Debates in September 2016.

Mr. Ban spotlighted the situation of many in the world who are fleeing from terrorism and oppression and reaffirmed that the UN ‘stands with the victims’ and reiterated that the Organization is doing everything possible to prevent and address conflicts caused by violent extremism.

“I am preparing a comprehensive Plan of Action to Prevent Violent Extremism to present to the General Assembly early next year,” said Mr. Ban.

Additionally, he welcomed the advances made in recent years across Southeast Asia and added that open democracies, human rights for all people, including minorities and women, along with sustainable development will unleash the region’s potential, underlining that ‘human rights drive democracy and stability’.

He reiterated his appreciation for the peaceful elections conducted in Myanmar on November 8th and reaffirmed UN support to the country as it consolidates progress.

At the same time, he noted that the region does face tensions especially regarding the competing claims in the South China Sea.

“I have consistently said all parties should exercise the utmost restraint and resolve their disputes in a peaceful manner, through dialogue and in conformity with international law,” said Mr. Ban.

Lastly, Mr. Ban emphasized that the valuable experience of the ASEAN countries can help the world and encouraged the leaders to share their knowledge with other regional organizations and the international community, and expressed confidence of expansion of the ASEAN-UN relations under the chairmanship of the Lao People’s Democratic Republic.

At the same time, speaking at the ASEAN East Asia Summit (EAS) in Kuala Lumpur, Mr. Ban highlighted the connection between regional and global issues citing extreme poverty, nuclear-powered nations, competing territorial or maritime claims, communal tensions and oppressive governance as some of the other chief issues in the region.

“We can meet these threats, and seize the wondrous opportunities of our era, through dialogue, burden-sharing and adherence to the values enshrined in the Charter of the United Nations,” said Mr. Ban in addition to welcoming the Trilateral Summit held by China, Japan and the Republic of Korea.

He also stressed that efforts made for enhanced inter-Korean dialogue can lead to peace and stability on the Korean Peninsula and “pave way for peaceful” reunification.

Further, he highlighted the possession of remarkable technological capacities and economic dynamism of East Asia, which represents more than half the world’s population.

“Progress in Asia is all the more critical now as the world copes with grave threats,” said Mr. Ban. “The United Nations will fully support you as we work for sustainable peace and prosperity in the region and beyond,” he concluded.