What could emojis bring to disaster response? 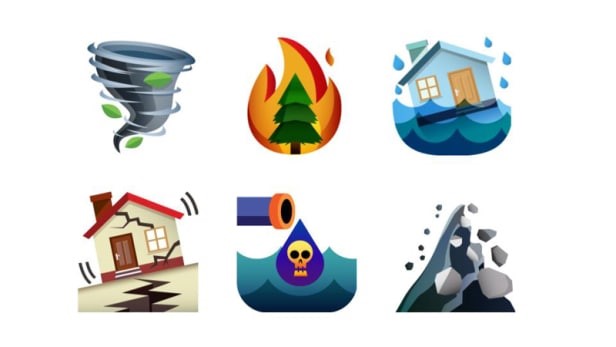 Jakarta, Indonesia, is regularly devastated by flooding. When disaster hits, Twitter has emerged as a powerful platform for communication, coordination among residents and emergency responses with the hashtag #banjir — the Indonesian word for flood.

“Right now a lot of the emergency response tools that are being developed are happening in a siloed way,” said Sara Dean, an architect and designer who previously worked on a web-based platform called Peta Jakarta, which gathered, sorted and displayed information on flooding in real time. “One of the advantages that we’ve found in social media is — even though it’s an untamed, noisy type of communication — it’s also a place where people are listening. And so they don’t need to know that an emergency is going to happen; they could even be very unprepared. But when you want to get their attention, you can get it because they’re already there.”

Recently, Dean has been working with a team of designers to develop emojis for disaster response. Emojis are the small pictorial symbols that appear on smartphone keyboards and social media. There are some existing icons that could be used to communicate climate disasters — a tornado and a flame, for example. But the system does not quite work as is. These symbols are typically used to signify a variety of meanings, and while the SOS icon might serve a purpose, many people will never find it tucked away in the miscellaneous tab.

As climate change drives more frequent extreme weather emergencies, emojis can offer some advantages over the written word. They are the closest thing we have to a global language, Dean said, explaining that the way in which these icons are available and used globally equips them with the potential to inform disaster response and enable a global conversation about climate.

Devex talks to Sara Dean, assistant professor and assistant chair of MFA Design at the California College of the Arts

At South by Southwest — the annual technology and innovation festival in Austin, Texas — a panel on emojis was so popular that people had to be turned away. The focus was the Unicode Consortium, a nonprofit organization based in Silicon Valley. In its role as the text encoding standardization committee, it decides which emojis end up on your phone.

Unicode is a computing industry standard that ensures that all languages — from Cyrillic script to Chinese characters — are consistent in their encoding, handling and representation across platforms. It ensures that what people write is recognizable across devices without miscommunication or deterioration, Dean said. When emojis were added to unicode, they got the same treatment, being written into the infrastructure for the internet.

Dean and her team — co-creator Beth Ferguson and designer Bo Peng — are pursuing two parallel tracks to develop “emerji,” the term they have coined for emojis for disaster response.

As a result, Dean and her team are applying to make the climate disaster emojis part of the official set so that people do not have to add them to their phone to be able to use them. This means getting them through the unicode decision-making committee.One is a climate disaster emoji set — including biohazard, air pollution, water pollution, cyclone, drought, earthquake, flood, landslide and wildfire — which will be available as an optional add on. But they face a similar challenge to KIMOJI, the collection of Kim Kardashian West emojis representing the celebrity, her posse and her favorite things. Users have to download these images separately, meaning these stickers and emoji are much harder to use and search.

Dean told Devex she hopes to partner with nongovernmental organizations to test the emerji icons in the field to make sure they meet their needs and the needs of the people they serve; but also to increase her chances with the committee, which has criteria including the expected frequency with which an emoji will be used.

Last month, the Unicode Consortium released version 10.0 of the Unicode Standard, which includes new emojis such as breastfeeding, a mermaid and a face with raised eyebrow. Dean said she hopes her emojis will soon become part of the unicode set so they can be read on any device.

“The biggest pushback I’ve gotten is that emoji are frivolous, and do we want to have emergency conversations in a format that has a smiling poop icon and a winky face? Doesn’t that undermine the emergency?” Dean told Devex at her home in Berkeley, California. “To me, the frivolousness and everydayness of emoji are their greatest attribute. When something [serious] happens, we don’t stop using the platforms we’re using — we just change the subject.”

The benefits of emojis include addressing the language bottlenecks that can get in the way of disaster response. Organizations looking for information on a particular disaster can search by hashtags and words, but those words vary between languages, and even the same language can have different words to refer to the same disaster. Emojis avoid that problem, and because they can be searched, Dean said they can function just as hashtags do, acting as global gathering places for conversations.

“We’ll have a much clearer global conversation around these climate disasters and be able to see how communities are dealing with events, how they’re responding, how they’re becoming resilient, and where and when events are happening around the world through social media,” she said.

Another option she is exploring is branded hashtag emoji, in which emojis automatically appear alongside selected hashtags on Twitter.

As she continues improving her emerji set, and working through the unicode process, she hopes the global development community will find a lesson in her efforts.

“I think there’s a huge potential for the humanitarian community to engage communities and vulnerable communities in a different way through platforms that, at this point, are community vernacular,” she said.