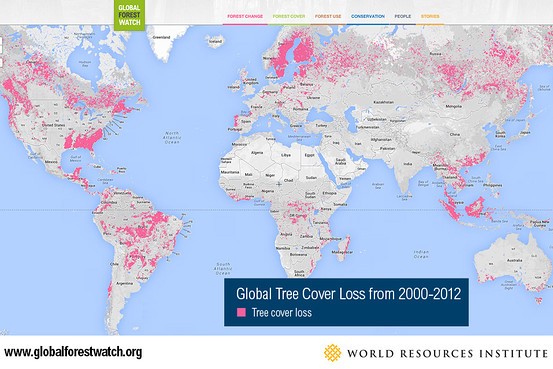 JAKARTA, Indonesia—When fires broke out on the Indonesian island of Sumatra last May, people wanted to know where they started and who was to blame.

Set largely as a means to clear land for planting, the fires also consumed native forest, drawing rebuke from environmental activists who pointed to the need for a tracking system that could better monitor what was happening on the ground in Indonesia.

Now, that call has been answered.

Data from the University of Maryland and Google shows that around 230 million hectares of forest – the equivalent of 50 soccer fields a minute – were lost between 2000 and 2012.

On Thursday, the Washington D.C.-based World Resources Institute (WRI), in partnership with 40 other organizations, including Google and the University of Maryland, launched Global Forest Watch, an online forest monitoring and alert system that relies on satellites and crowdsourcing to keep an eye on how forests are being managed.

According to data from the University of Maryland, which recently conducted a global survey of deforestation, around 230 million hectares of forest – the equivalent of 50 soccer fields a minute – were lost between 2000 and 2012. Indonesia lost 2 million hectares of its forests – the world’s third largest – in that last year alone.

The monitoring system is an effort to curb forest loss by pinpointing the causes of the clearing. The problem in the past, say researchers at WRI, has been the lack of ability to know what’s happening in the forests. In the last 10 years, however, there has been an “amazing transformation,” with more satellites, more data and more transparency in relation to that data, said WRI President and CEO Andrew Steer.

Starting last May, land fires in Sumatra sent haze across Southeast Asia, causing major health problems and harming relations between Indonesia and Singapore. This map shows that many of those fires detected by a fire data system from NASA were located within oil palm plantations, indicating that they may have been set to clear forest for agricultural development.

Advances in technology have also allowed people to almost instantaneously notify others about what’s happening in the forests, he added.

That’s important, particularly since many of the world’s most biodiverse rainforests are located in remote places where law enforcement is weak. Indonesia, for example, has laws in place to curb deforestation, but often people don’t know that trees are being felled until it’s too late.

Governments can use the maps on Global Forest Watch to detect illegal forest clearing and better enforce those laws, say researchers, while companies can use the platform to make sure products such as palm oil and timber are not coming from suppliers involved in deforestation.

Global Forest Watch uses a system that provides monthly alerts of areas where new tree cover loss is likely to have happened. This shot of a protected national park on Indonesias Sumatra Island shows areas where major deforestation has occurred.

The maps allow users to view forest loss and forest gain since 2000. They can also see which areas are being used for logging or mining and what companies are operating there. Overlays can be put over the map to allow users to see which forests are protected.

In Southeast Asia, particularly countries like Myanmar, where international investment is pouring in and plans for agricultural development are expanding, the maps can provide a good resource to international investors who “don’t want to risk controversy for investing in a company or a project that might be associated with deforestation,” said James Anderson, the forests communications officer at WRI.

“It’s having information like this that is clear, verifiable and downloadable, that puts an element of proveability into a lot of these debates about deforestation,” he said.

Duncan Pollard, associate vice president for sustainability at Nestle, which provided input in the platform’s development, said it would help the company refine the way it works on the ground.

This is not the first time maps showing deforestation have been made available, but researchers say ones utilized in the past did not provide real-time updates and were often very hard to interpret.

“It has also never been presented in a way that allows people to overlay it easily with other information such as protected areas, logging concessions and so on, so they can get some sense of who might be accountable where forest cover change is taking place and whether that’s good or bad change,” said Nigel Sizer, director of WRI’s Global Forest Initiative.

“We are taking an enormous amount of complex information and making it accessible to anyone everywhere,” he added.

The launch of the platform comes just days after U.S. Secretary of State John Kerry on a visit to Jakarta called on Indonesia to take steps to combat climate change to prevent a serve blow to country’s natural resources and its economic development.

In a video message during Global Forest Watch’s launch, Heru Prasetyno, the head of a government initiative to combat deforestation in Indonesia, acknowledged that message, and she he stood behind efforts to monitor the country’s forests more closely.

It’s a well-known fact that climate change is upon us,” he said. “The problems created by that is a global problem that will demand a global solution.”