The Paris Agreement: Can Indonesia Be The Next Brazil?

Brazil’s dropping GHG emissions are linked to its efforts to reduce deforestation, something Indonesia may want to emulate. 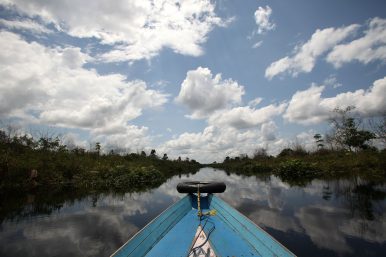 A boat travels up one of many drainage canals in Central Kalimantan, Indonesia. Dug as part of Indonesia's Mega Rice Project in the mid 1990s, the canals drain surrounding forests of water, making them highly susceptible to fires. Image Credit: Flickr / dfataustralianaid

It has been almost one year since Indonesia ratified the Paris Agreement, binding the country’s commitment to limit warming to well below 2 degrees Celsius and to keep temperature rise to 1.5 degrees Celsius. As the country relies heavily on its natural resources and land use, failing to cooperate with the climate change policy could create potential consequences economically and environmentally.

Under present policy settings, GHG emissions should be stabilizing, if not decreasing. Future projections, however, show no signs of a decline in Indonesia’s emissions. Indonesia will incur greater emissions from deforestation and coal, as well as from energy and industry sectors over the period to 2030. This shows that Indonesia has not yet aligned with its INDC, let alone the Paris Agreement.

Brazil, a populous country and a large emitter, is also home to several dense rainforests. Despite the distance, Brazil has distinct similarities to Indonesia. Perhaps the most crucial similarity is that land use and the forestry sector are major sources of Brazil’s GHG emissions. Nonetheless, Brazil succeeded in reducing its GHG emissions by 25 percent in between 2005 and 2009 due to major changes in policies and increased law enforcement to fight Amazonian deforestation (from 21,000 square kilometers between 2000-2004 to 6,200 square km between 2009-2011).

To meet the 1.5 – 2 degrees Celsius target, Indonesia should mimic Brazil in terms of its environment-related domestic laws and enforcement mechanisms.

Indonesia’s national forest moratorium only aims to slow primary forest and peatland clearing for agricultural expansion, but does not intend to stop deforestation entirely. Indonesia, like Brazil, should commit to an action plan that emphasizes a zero-deforestation goal nationwide by 2030 and outlines the distinction between illegal and legal deforestation. Setting new protected areas, boosting certification schemes for sustainable products, rewarding indigenous people for preserving forests, and doubling down on forest monitoring are some recommendations that the government could take into account to achieve this zero-deforestation target.

While Brazil’s INDC has a goal of reaching a 45 percent share of renewables in its primary energy mix by 2030, Indonesia only targets an increase of renewable energy to 25 percent by 2030. One way for Brazil to reach its emissions reduction targets is by using more renewable energy resources, in addition to hydropower generations, to supply 23 percent of electricity by 2030. Brazil will also welcome other sources such as biofuels, biomass, solar and wind to its major energy mix. Brazil’s low-carbon trajectory, as estimated by the International Energy Agency, will help the country prevent 2 degree Celsius warming.

Indonesia should be more ambitious in setting its target for renewable energy considering the huge potential for solar, ocean, wind, bioenergy, hydropower, and geothermal it possesses.

One way to do so is for Indonesia to increase its renewable energy capacity by growing its renewable investment target. On current trends, setting aside the state budget for all renewables, Indonesia still needs approximately $9.4 billion annual investment between 2015 to 2030 to build the targeted 45GW renewable capacity. Doubling the capacity, hence, doubling the amount of investments may be required.

More needs to be done by the Indonesian government to lure back investors for renewable projects to become viable. Creating new policy frameworks which are more financially-friendly for the investors and simplifying the renewable projects licensing process are some of a few.

Indonesia has a long way to go to get a Brazil-type returns in terms of cutting down the GHG emission to reach the Paris Agreement target. Unless Jakarta focuses on deforestation and growing the renewable energy sector in the years to come, Indonesia might have to kiss its Paris carbon cut targets goodbye.