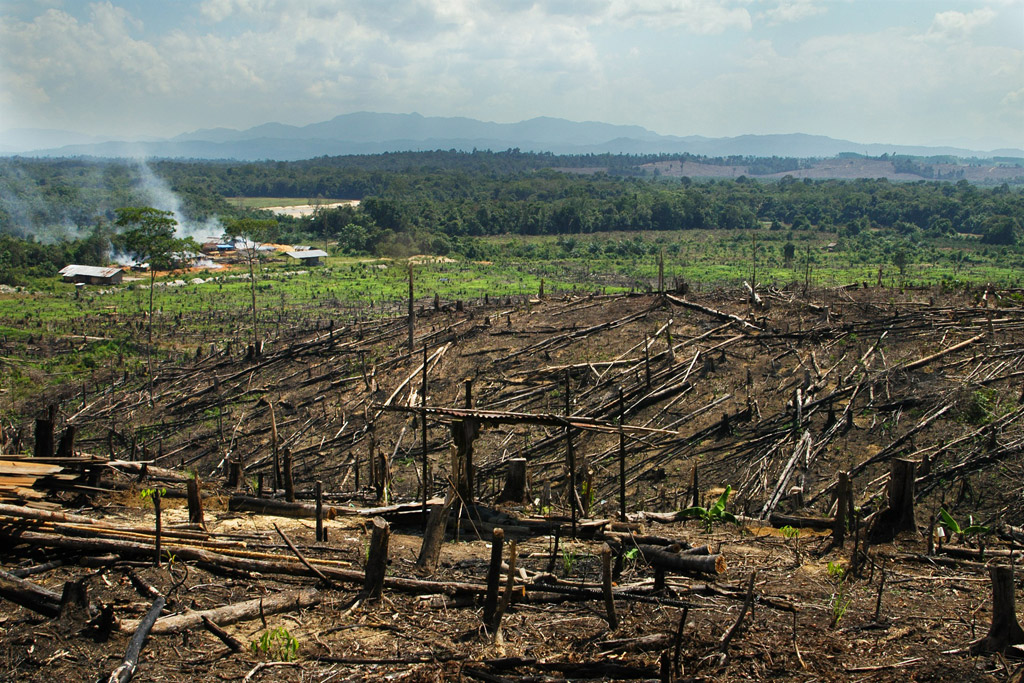 Burning rainforests on Borneo and Sumatra to make space for palm oil plantations is one of the greatest threats to orangutans. Photo: UNEP GRID Arendal/Peter Prokosch

29 July 2015 – The massive conversion of Borneo’s forests for the production palm oil together with the impact of climate change is driving to extinction the orangutan on Asia’s largest island, making it “clear that a future without sustainable development will be a future with a different climate and, eventually, without orangutans, one of our closest relatives,” a new United Nations report revealed today.

This, according to Achim Steiner, the Executive Director of the UN Environment Programme (UNEP), who wrote the foreword of the report, The Future of the Bornean Orangutan: Impacts of Change in Land Cover and Climate, released today. And the report’s lead author Dr. Serge Wich declared: “The current policies for land conversion on Borneo are simply unsustainable” not just for orangutans but for the human population as well.

According to the report published by UNEP and Liverpool John Moores University in collaboration with the Great Apes Survival Partnership (GRASP), “the massive conversion of Borneo’s forests for agricultural development - primarily oil palm - will leave the endangered orangutans fragmented and facing extinction in a number of areas.”

“The environmental impact of climate change exacerbated by the deforestation of Borneo could result in severe floods, temperature rises, reduced agricultural productivity and other negative effects,” the report said.

While native to Indonesia and Malaysia, a century of deforestation, illegal logging, hunting and expansion of agro-industrial plantations, have combined to isolate orangutans to only the rainforests of Borneo – the world’s third largest island – and Sumatra, says UNEP.

Borneo’s deforestation rate has been among the world’s highest for over two decades and 56 per cent of the protected tropical lowland forests – an area roughly the size of Belgium – was lost between 1985 and 2001.

The report goes on to say that if deforestation in the Southeast Asia continues, a staggering 75 per cent of the original forest cover will be lost by 2030.

The Future of the Bornean Orangutan, according to a UNEP press release examines different climate and land-cover scenarios for the years 2020, 2050 and 2080 and models the individual and combined effect of both factors on the orangutan habitat.

In each scenario, “dramatic rises” in temperature brought on by deforestation and the loss of land cover cause serious damage to the island’s biodiversity, with the combined model showing an even more pronounced impact than either factor alone, the report said.

UNEP’s top official, Mr. Steiner, urged adoption of programs that measure the natural capital of a region and offer payment for ecosystem services to mitigate these threats.

“Now, it is time to utilize these approaches and divert from an unsustainable pathway to development,” he wrote. “It is clear that a future without sustainable development will be a future with a different climate and, eventually, without orangutans, one of our closest relatives.”

An estimated 55,000 Bornean orangutans remain in the wild, according to UNEP.

“But orangutans’ solitary nature and slow reproductive rates leave them particularly vulnerable to forest loss,” the agency said. “Models incorporating projected changes to climate and to land cover indicate that 68-81 per cent of the current orangutan habitat might be lost by 2080.”

Among the 59-page report's eight recommendations to curb the impact of agricultural conversion are: immediate identification and protection of priority orangutan populations and habitats; connection of key orangutan sites through the creation of corridors, so as to ensure the species' mobility and viability; conversion to more sustainable methods of agricultural use for palm oil and other crops; and support forest protection programs.

GRASP is an alliance of 100 national governments, conservation organizations, research institutions, UN agencies, and private companies committed to ensuring the longterm survival of great apes in Africa and Asia.

The report was presented at the GRASP Regional Meeting – Southeast Asia on Borneo in Kota Kinabalu, Malaysia.