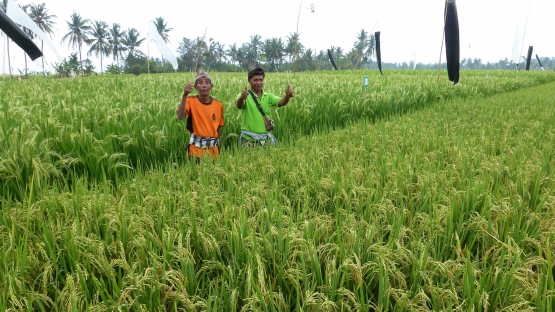 The village of Gowa in the South Sulawesi province of Indonesia has an agrarian history that dates back to the fourteenth century – an agricultural prominence it still maintains, in part due to the top-grade fertile soil in the region. In fact, the area is now serving as a center for the introduction of new mutant rice varieties that owe their existence to nuclear technology. Through the combined expertise of the National Nuclear Energy Agency of Indonesia (BATAN), the Joint FAO/IAEA Division and PB Salewangang, a certified seed breeding company, 18 Gowa farmers have planted their land exclusively with six new mutant rice varieties. But these farmers aren’t growing the new varieties as a food crop. They are using BATAN’s breeder seed material in their fields for seed multiplication. Once multiplied, PB Salewangang distributes seeds to other farmers interested in planting the new varieties to take advantage of their improved yield and quality.

Although Indonesia is the world’s third largest grower of rice, it still must import rice almost every year, mainly to keep reserves at a safe level. The main reasons for the gap can be traced to farmers using non-optimal production techniques and to the fact that each person in the country consumes an average 150 kg of rice per year – an extremely high consumption rate. In addition, smallholder farmers, with less than 0.8 ha of land, account for 90 percent of Indonesia’s rice production and so cannot take advantage of economies of scale in their production. Indonesia encourages technological innovation in its goal of reaching self-sufficiency in rice production.

Indonesia encourages technological innovation in its goal of reaching self-sufficiency in rice production. In addition to promoting improved rice infrastructure, including irrigation planning, it also supports the plant mutation breeding work of the National Nuclear Energy Agency of Indonesia (BATAN). BATAN has a long history of success, breeding crop varieties that bring higher yields to meet the needs of Indonesian farmers. Now, it is expanding this success – still breeding for yield but also focusing on specific quality parameters, meaning that it seeks varieties that have the taste and texture that consumers are increasingly looking for. 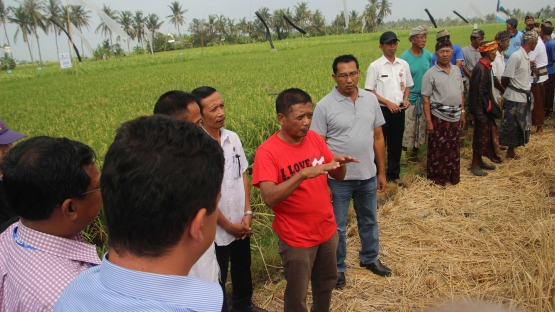 Since the 1970s, BATAN has worked very closely with the Joint FAO/IAEA Division and has received both state-of-the-art equipment and extensive training in the implementation and use of mutation breeding technologies that improve and speed up the process of mutation breeding. Indeed, the Joint Division has promoted the worldwide use of plant mutation breeding since its inception in 1964. As of March 2018, people around the world were benefitting from 3 275 officially released mutant varieties of 214 different plant species, 50 percent of which are cereals and 15 percent are legumes. The process itself calls for exposing seeds to gamma irradiation, which generates random genetic variations. Those variations that display the desired characteristics are then subject to further testing and breeding.

To date, BATAN has developed 23 mutant rice varieties. It typically contracts with certified seed breeding companies that multiply the seeds for dissemination and then market the new seeds to farmers, hosting harvest fairs to introduce farmers to the advantages of adopting the new varieties.

PB Salewangang, one of Indonesia’s most respected producers of certified seed, chose farmers in Gowa, in South Sulawesi, to multiply the seeds of six of BATAN’s latest mutant varieties. This area was chosen because, while it has top-grade soil, farmers there do not really prosper as they should, mainly because they have insufficient supply of good quality rice seeds that would ensure high yields and a profitable return.

In 2016, those farmers growing BATAN’s new Sidenuk, DiahSuci and Mira-1 rice varieties had a 150 percent increase in yield compared with conventional paddy seeds and were indeed able to supply 3 percent of the seed required by the entire South Sulawesi province. The success inspired other farmers to use the company’s seeds. In 2017, the company chose 18 farmers to plant six mutant varieties and, with the March 2018 harvest, the six varieties had averaged a 50 percent increase in yield.

These new rice mutant varieties are especially important today because they are adaptable to climate change variability. Already, 4.7 percent of Indonesia’s rice fields are cultivated with high-yielding mutant varieties of rice. This means that 800 000 farmers are involved, and they are producing enough rice for 20 million people. BATAN recognizes the value of these high yielding varieties and, in collaboration with some local governments and the Ministry of Agriculture, it has established Agro Techno Parks (ATPs) in some provinces which are expected to become centers of excellence for developing certified seeds of mutant varieties and related technologies to support food production under climate-smart agriculture.