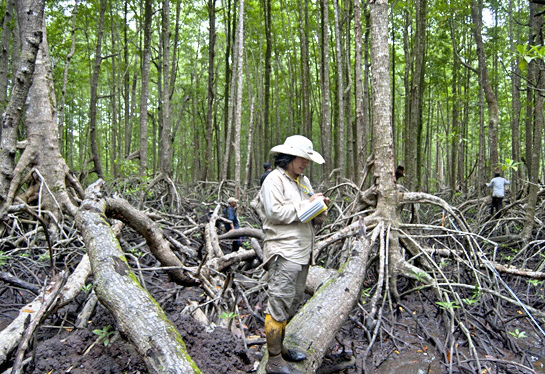 BOGOR, Indonesia – Indonesia’s mangroves are a massive storehouse of carbon and a key bargaining chip for the country in the upcoming climate change negotiations in Paris, according to the authors of a new study published in Nature Climate Change.

“Indonesian policymakers should see protecting and sustainably managing mangroves as a potential solution for climate change mitigation,” says Daniel Murdiyarso, the study’s lead author and a principal scientist at the Center for International Forestry Research (CIFOR).

“But to make progress, it is crucial that mangroves are protected and managed sustainably.”

Large areas of Indonesia’s mangroves have been cleared in recent decades, but there’s perhaps never been a better time – nor such stark political motivation – to change this dynamic.

The new study builds on previous findings that mangroves hold 3–5 times as much carbon as the same area of rainforest, indicating that Indonesian mangroves top the list in carbon-density – storing some 3.14 billion tons of carbon, mostly in the soil.

“Global storage of carbon in this type of ecosystem is around 10 billion tons, so Indonesia has one-third of that total in its mangroves,” says Murdiyarso.

This is important because when mangroves are cleared, and their soils drained or dug up, carbon is oxidized and released into the atmosphere, contributing to climate change.

This fact makes it all the more concerning that Indonesia is clearing its mangroves faster than any other country on Earth, bar one (the Dominican Republic), say the authors.

On a global scale, the new study reports, carbon released through the loss of Indonesia’s mangrove forests accounts for 42 percent of global greenhouse gas emissions from the destruction of coastal ecosystems.

The scientists measured the carbon at various sites across the Indonesian archipelago.

They found that mangroves along the coasts of densely populated Java contain just over 500 tons of carbon per hectare, whereas the same area in remote and sparsely populated Papua holds almost 1500 tons.

With such rich carbon stores, Indonesia’s 2.9 million hectares of mangroves are “globally significant sinks of carbon”.

Which means conserving Indonesia’s mangroves must top the list of national efforts to cut carbon emissions.

In recent years, Indonesia has made some strong commitments to cutting its greenhouse gases. Before the climate change negotiations in Copenhagen in 2009, Indonesia committed to a 26 percent reduction in emissions by 2020. In 2011, the government floated the potential for a 41 percent reduction over the same timeframe, conditional on further international support.

To meet either of these targets, Indonesia needs to reduce deforestation, as land use is the main source of greenhouse gas emissions.

And Indonesia’s annual emissions from clearing mangroves account for up to 20 percent of its total land-use emissions.

“Especially with climate change negotiations starting to wind up to Paris, this is a good time to bring forward mangroves’ potential for mitigation,” says Murdiyarso.

And here is the silver lining in the ongoing destruction of Indonesia’s mangroves.

Director General for Climate Change in Indonesia’s Ministry of Environment and Forestry, Dr. Nur Masripatin, is acutely aware of that potential.

“No one disagrees about the importance of this ecosystem, both for climate change and also the livelihoods of people surrounding these mangroves,” she says.

“In terms of climate change, mangroves are one of the places where mitigation and adaptation can be pursued jointly.”

What is apparent from Murdiyarso’s study – and clearly foremost in the minds of both scientists and key policymakers – is that halting, or significantly slowing, mangrove loss promises to take Indonesia a giant step toward its emission reduction targets, whose deadline is now a mere five years away.

Reversing the trend means understanding who benefits from mangrove loss.

The answer: aquaculture, predominantly shrimp farming, an industry that, over the past three decades, has come to gross $1.5 billion a year nationally. This might sound like a win for Indonesia’s fisheries, but it’s not quite that simple.

Given the risks for wild-caught fisheries when mangroves are cleared for aquaculture, it isn’t apparent whether there is in fact a net gain for Indonesia’s fisheries, let alone Indonesian livelihoods.

“Mangroves are also effective land-builders. Their ability to trap sediment from upstream and debris offer significant services in protecting the coastal zones and the interior from sea level rise,” says Murdiyarso.

“Although these ecosystem services haven’t been monetized yet, they still have to be taken into account.”

Stopping mangrove clearing is likely to be a complex and demanding policy challenge.

Daniel Murdiyarso is under no illusions about the scale of this task.

“Sustainable mangrove management is a big challenge,” he says.

“Mangroves are managed by so many different agencies that don’t necessarily communicate with each other. It is important for these agencies to sit together and set the rules, policies and strategies to handle mangroves properly.”

Scientists and policymakers agree that better protecting Indonesia’s mangroves will require a back-to-basics approach, coordinating relevant ministries at the national level while also persuading local governments of the ecosystem’s importance. CIFOR has designed a sustainable wetlands learning toolbox to help with some of these challenges.

And with the new study clarifying the vital potential of Indonesia’s mangroves for helping the country meet its targets, Indonesian policymakers could have the knowledge and reason to turn the tide against climate change.