Indonesia set to be world's No. 3 air polluter 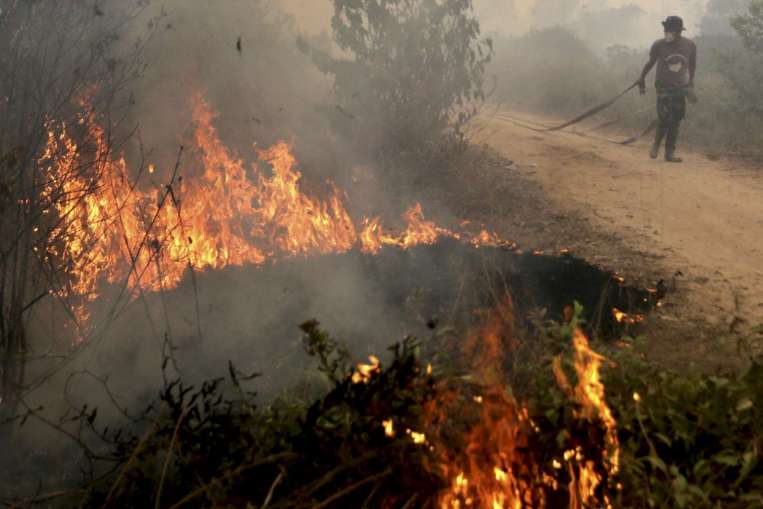 An Indonesian soldier drags a hose while fighting a peatland fire in Ogan Ilir, South Sumatra province on the island of Sumatra.PHOTO: REUTERS

Indonesia is on track to become the world's third-largest greenhouse gas polluter this year, surpassing India, as raging forest and land fires pump out huge volumes of carbon dioxide and thick smoke.

Happening just weeks before a major global climate conference, the fires underscore Indonesia's immense challenge in curbing emissions from agriculture and put into question its ability to meet its climate targets.

Indonesia has just released a detailed climate action plan for the United Nations conference in Paris from Nov 30 to Dec 11. The UN hopes nations will agree on a global deal to fight climate change centered on cutting carbon emissions. Indonesia has pledged to cut emissions from business-as-usual levels by 29 per cent by 2030.

In theory, Indonesia could slash its greenhouse gas pollution by curbing unregulated and poorly planned expansion of palm oil and pulpwood plantations, particularly on carbon-rich peatlands.

But ongoing agricultural expansion is setting up Indonesia for large and uncontrolled carbon emissions. More intense droughts in future, as the planet heats up, could also trigger worse fires.

Peatlands are a top concern. Once cleared and drained, they release huge amounts of carbon dioxide (CO2) for decades as they decompose.

Initial estimates show the current fires have emitted nearly twice the annual emissions of Australia and could double again before the rainy season finally comes.

"How large the emissions eventually will be depends on how long El Nino can delay the onset of the wet season. My take is that we are halfway through the fire season," Dr. Guido van der Werf, of the Faculty of Earth and Life Sciences at Vrije Universiteit in Amsterdam, told The Sunday Times in an e-mail.

The El Nino weather pattern normally brings drought to Indonesia and parts of Australia and this year's event is set to last for several more months.

Dr. van der Werf, a specialist in estimating greenhouse gas emissions from fires, runs daily analyses on Indonesia's blazes using data from the US National Aeronautics and Space Administration (NASA). As of last Thursday, the fires are estimated to have emitted the equivalent of just over one billion tons of CO2.

By comparison, total annual emissions from Japan, the world's No. 5 carbon polluter, are about 1.3 billion tons. India, at 2.5 billion tons, according to the latest 2013 data via Carbon Atlas, is No. 3.

Indonesia ranks in the top 10 global carbon polluters but bad fire seasons like this year's can propel it to near the top, with only China and the United States emitting more.

Indonesia has some of the planet's best tools to fight climate change. Its rainforests and mangroves soak up and store huge amounts of CO2, acting like a lung for the atmosphere, and its peatlands act like a bank, storing huge carbon deposits built up over thousands of years.

Years of rapid deforestation, though, means Indonesia has become a climate time bomb as its peatlands degrade and go up in smoke.

Vice-President Jusuf Kalla is famously quoted as saying Indonesia's neighbors should stop complaining about the haze and instead be thankful for the clear air provided by Indonesia's forests.

"For 11 months, they enjoyed nice air from Indonesia and they never thanked us," he said last March.

Those benefits are vanishing.

Indonesia's peatlands, among the largest in the world, are estimated to contain about 60 billion tons of carbon - the equivalent of nearly 220 billion tons of CO2, or about 22 years of China's 2013 CO2 emissions. Continued clearance and burning will only stoke climate change and increase the threat to Indonesia, with an estimated 42 million Indonesians at risk from rising sea levels, says the government.

This year, Indonesia's land-based emissions could hit more than two billion tons of CO2 because of the fires, particularly smoldering peat fires which release large amounts of methane, a greenhouse gas 25 times more powerful than CO2.

Only about a quarter of Indonesia's emissions comes from burning oil, coal and gas, though that will also change.

Mr. Marcel Silvius, Wetlands International's program head, Climate-Smart Land Use, said Indonesia has to move to a development model away from peatlands. He expressed frustration over the lack of action despite the government knowing the risks.

"The development just progresses as if nothing was known about this," he told The Sunday Times.

Indonesia has plenty of conservation rules, says Dr. Louis Verchot, director of forests and environment at the Centre for International Forestry Research in Bogor, Indonesia. But it needs to do things differently, particularly improving coordination between ministries and local and regional governments.

"They have to stop producing palm oil on peat and stop producing pulp for paper on peat," he told The Sunday Times from haze-choked Palangkaraya, capital of Central Kalimantan, one of the provinces worst hit by the fires. He was there last week with a British team measuring the composition of the smoldering peat fires.

The crisis on the ground bears little resemblance to the goals of Indonesia's climate pledge.

"It seems like there is a distance between what we are saying in our pledge and what we currently practice on the ground. That is something we want you to keep pounding us with," said Dr. Nirarta Samadhi, Indonesia country director for the World Resources Institute think-tank, and part of the team that crafted the government's climate pledge. The government, he said, needed to keep hearing the message on land use reform.

Change is possible. Indonesia need only look to Brazil.

Emissions in Brazil have plunged because of an 80 per cent decrease in deforestation since 2004. Total emissions in 2013 were down more than 40 per cent since the all-time high in 2004. The consequence? Cutting deforestation prevented 3.2 billion tons in emissions that would have otherwise been expected, equal to taking all cars off American roads for three years, according to environmental news site Mongabay.com.