Indonesia's fires are a corporate crime 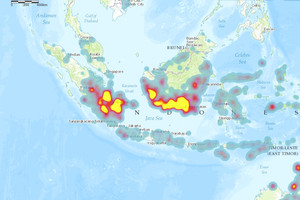 Fires burn across Indonesia. Photo: www.globalforestwatch.org.The United Nation's Intergovernmental Panel on Climate Change estimated in 2011 that carbon dioxide emissions had to be limited to 1000 gigatons in order to have a two-thirds chance of keeping global warming below 2°C.

By mid-October, there were more than 100,000 fires raging in the Indonesian provinces of Sumatra and Kalimantan that had released an estimated 995 million metric tons of carbon dioxide into the atmosphere over the past four months. This is just short of 1 gigaton.

When these fires are eventually extinguished they will certainly have released much more than a gigaton of carbon dioxide.

The forest fires are deliberately lit by companies to minimize the cost of land clearing to make way for both palm oil and pulp and paper plantations. The fact that this is illegal seems to count for nothing in the corrupt Indonesian state. They have been an annual dry season event since 1997.

The beneficiaries are palm oil users that include PepsiCo and Kraft Heinz, and the Indonesian pulp and paper multinational Asia Pulp and Paper.

This year's fires are set to be the most intensive and damaging on record due to the prolonged El Nino event which is halting monsoonal rains. At least 12 people have died from the direct effects of smoke inhalation and almost half-a-million people have suffered respiratory illnesses requiring medical treatment.

For the third successive dry season the choking haze from the fires has enveloped Singapore and western peninsula Malaysia. This year the haze has travelled further, to Phuket in Thailand and to Malaysia's Borneo states.

Last week, two Pacific cyclones carried the haze to Guam, thousands of kilometers northeast, causing health warnings to be issued in the Palau and Marianas Islands. It has also spread to the southern island of Mindanao in the Philippines, 1200 kilometers away, as well as to the central islands of Cebu and Negros, disrupting air traffic and triggering warnings for residents to wear face masks.

More than 6000 schools in Indonesia and Malaysia have either closed or had their hours of opening restricted. This followed the death of a nine-year-old girl in Riau on the central-eastern coast of Sumatra where the provincial health agency has advised people to wear masks even when indoors.

The Washington-based World Resources Institute (WRI) reported last week that 52% of the total fires so far this year occurred on peatlands that have stored carbon-rich peat for thousands of years.

WRI also calculated that over the course of a three week period from late September, the output of carbon dioxide from the fires exceeded Germany's annual total carbon emissions. The institute also calculated that on 26 days in September and October, greenhouse gas emissions from the fires exceeded the average daily output of the entire US economy.

The Indonesian National Board for Disaster Management has renewed requests to foreign nations for more firefighting aircraft after the recent first phase of international assistance failed to bring the fires under control. Even if this is provided, the fires are not expected to be extinguished until sometime next year.

Assistance from rich nations should, of course, be provided. But it must come with an insistence that the deliberately lit fires be prevented from occurring ever again – together with the material resources to achieve it.

Chairperson of the People's Democratic Party in South Sumatra Jai Marta released a statement that blamed the cause of the conflagrations on capitalist greed that amounted to corporate crime. He called for an occupation of the governor's office demanding action against the companies responsible for setting the country alight.

But it should not be left to individual activists, risking jail and worse, to fight against the corrupt politics that allows these fires, which affect the whole planet, to continue year after year.

There is a long history of solidarity between the Australian left and Indonesia.
In 1943, the Dutch ship Both carried 500 Indonesian nationalist political prisoners and their families from Tanah Merah prison in what was then Dutch New Guinea to Sydney. Included among them were the leadership of the Indonesian Communist Party who had been incarcerated since 1926. A concerted campaign in Australia led to the prisoners' release.

When Indonesian revolutionaries called for a boycott of the Dutch effort to re-take control of Indonesia at the end of WWII, Australian maritime unions responded by tying up the 450-strong Dutch fleet from 1946 until independence was finally won in 1949.

This solidarity has to be rebuilt, and a good place to start is at the people's climate marches around the country on November 27-29.