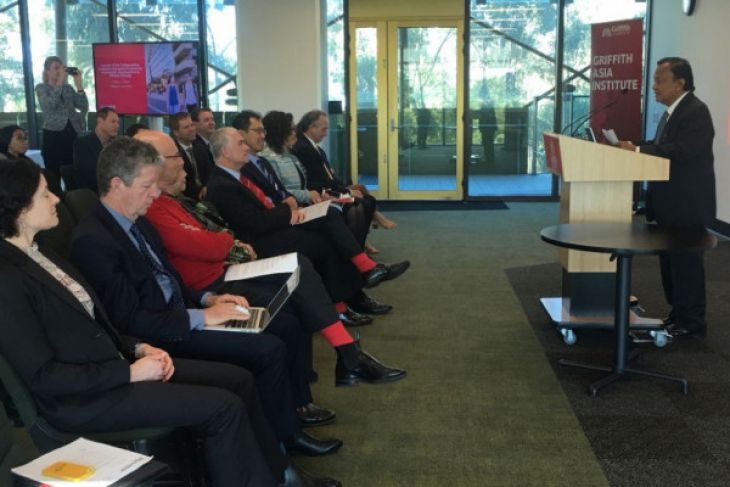 Indonesian President's Special Envoy on Climate Change, Professor Rachmat Witoelar, delivered a keynote speech at the launch of the Indonesia-Australia collaborative program on climate change before academicians of Griffith University in Brisbane on June 11, 2018. (Libertina W.A)

A statement from the Indonesian Consulate General in Sydney received by Antara here on Saturday mentioned that the launching ceremony was attended by the Consul General of RI in Sydney, Heru Subolo.

This collaborative program has been developed by the Griffith Asia Institute under the leadership of Professor Caitlin Byrne as the director of the institute.

"This collaborative program is a reflection of Griffith University's commitment to establishing close relations with Indonesia through a strategic and mutually beneficial program, especially in the areas of sustainable development and climate change," Prof. Byrne remarked at the launch.

Meanwhile, Prof. Witoelar, in his keynote speech, expressed high appreciation to Griffith University and underlined the importance of the collaborative program.

"I believe that this program will positively contribute to bilateral cooperation between Indonesia and Australia. Also, it will contribute to regional cooperation, in particular, to advance the United Nations sustainable development goals and implement the Paris Agreement on Climate Change," Witoelar revealed.

Following the launch of the program, Griffith University will build partnerships with relevant institutions in Indonesia.

In addition, the Griffith University will hold its first dialogue in Brisbane, Australia, in November 2018, with the theme "Deepening Regional Cooperation on Climate Change - An Agenda for the Future."

The Consulate General in Sydney, which is in charge of working areas for the states of New South Wales, Queensland, and South Australia, continues to promote educational programs, including the development of cooperation between educational institutions in Indonesia and Australia to strengthen relations between the two countries.