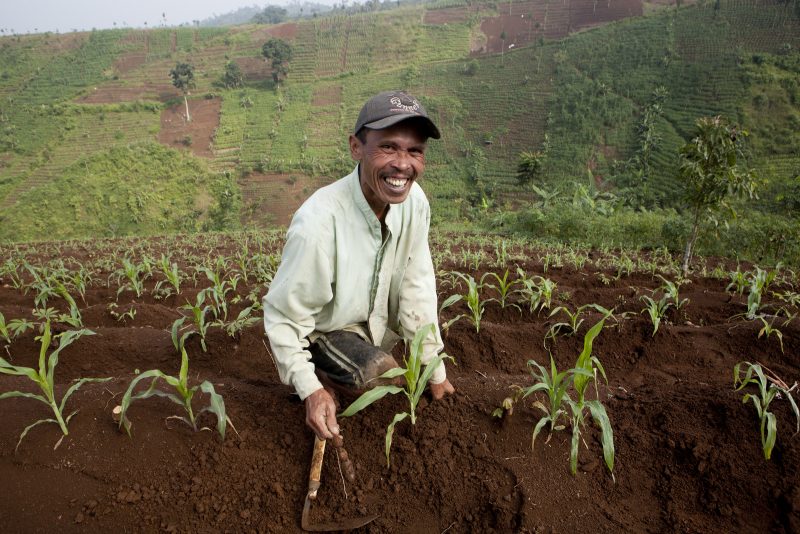 Climate change is already affecting people around the world — so adapting is crucial.

In some places, at least, people are finding innovative ways to adapt, according to new research. A new study shows that using nature to adapt to intense storms and drought can be affective for thriving in a changing climate.

In some Indonesian villages on Borneo Island and Java, people cut down trees along the banks of rivers to sell or use for fuel. Without the trees there as a buffer, the soil erodes into the streams, swallowing up the water or turning it murky brown. At the same time, these islands are experiencing more instances of intense rain and drought, making it more difficult to grow food.

Giacomo Fedele, climate change adaptation fellow at Conservation International’s Moore Center for Science, traveled to two villages in Borneo and two villages in Java to learn how different communities responded to flood and drought caused by climate change. In a recent interview, Human Nature spoke with him about his research.

Question: What were you looking for in your research?

Answer: I surveyed four different villages on Borneo and Java, and spent two months in each village, observing how the villages adapted to climate change.

They’re experiencing more frequent and intense floods, drought, pests and diseases that directly affect their livelihoods. For example, the crops they produce are rice and other vegetables. So, when there’s a flood or a drought, the yields could be reduced up to 50 percent.

The villagers notice changes and they’re taking action to adapt to the changes. That’s what the study is about: How people use natural resources and ecosystems to adapt to a changing climate and its impact on droughts and floods.

A: Carbon is increasing [in the atmosphere] and local biodiversity is decreasing, which drives climate change.

Some people are converting the forests to rubber plantations because they offer more flexible livelihoods. They can store this rubber and they can sell it anytime they want. They can tap the trees, get the latex and then they sell it in the market whenever they need to. This is better than forests for them, but of course, the long-term effects might be worse because cutting down trees can drive climate change. They might not be aware of those effects now. They need this money to repair their houses and to buy new seeds for the crops.

I was looking at how this kind of management of natural resources is impacting the water, the carbon sequestration, and the biodiversity. These actions impact the local community and often the whole region. Often the community doesn’t realize the people downstream also need the watershed well-preserved with trees and forests that help filter the water. They also don’t think about carbon and how it’s destabilizing the climate. It could easily go into this vicious cycle, but the good part of the story is that there are several strategies that provide multiple benefits that are good for the communities.

Q: What are the strategies that the villages are using to mitigate these problems?

A: One strategy is agroforestry — planting more trees in their garden. This increases biodiversity and water availability seemed to increase slowly, which is particularly important in case of drought. When precipitation is scarce community members noticed more water. Usually, they plant the rice three times during the year. If there’s not enough water — two times. And if there’s very little water — only one. Recently they’ve noticed that they can plant up to two times again.

Another adaptation strategy is reforestation of the least productive rice fields. They used to cultivate the steep slopes that are far from the river. They decided to change this because they need more time to access this land, it takes a lot of labor to prepare the land and people are getting too old to farm the land because some young people are migrating to the cities for better opportunities. Climate change and drought are making the soil less fertile, so they prefer to convert this agricultural land back to the forest by planting teak. Teak requires less attention. They don’t have to water the plants in case of drought. They can cut and harvest [the teak] anytime they want. Teak is good for land productivity, for the water, for the biodiversity and for reducing carbon.

Q: Was there any difficulty persuading people to use these long-term solutions rather than short-term?

A: I think you can have both. You can talk to people about the long-term changes and how it’s important to reforest and protect some areas now for the future benefits.

People experienced a lot of changes in the land use in the last 20 years. Forests were completely converted to agricultural land, so they noticed the changes in the water quality. Communities will tell you we have this natural forest and now it has been cut down and converted to a plantation and we noticed a decline in the water availability. In the tropics, the trees grow very fast. In 10-20 years it can be a forest again. They noticed improvements in the water after 5-10 years of regrowing forests. So, this is really encouraging. You don’t have to choose between having a protected forest, or you having your field of crops. It’s about finding this compromise between uses for land.

Q: Did anything surprise you?

A: I was very surprised that all of the strategies were “bottom-up.” For example, there was only one farmer that started planting teak on his land, but the other farmers started copying this strategy because they saw the benefits. The farming association started distributing seedlings, helped to create rules on how to cut and when to prune these trees, the distance they should have between each other, as well as a formal rule that says every time they cut one tree, they should try to plant at least 10 others. They also have all these informal social rules — they even take pride in taking care of their gardens.

In another case, the village chief noticed that the forest was getting very degraded. There was more soil going to the river and this was increasing floods. The very progressive village chief made a rule that people couldn’t cut the trees at the top of the river anymore. They could use the branches and the leaves, but not the trees, so they would help to stabilize the soil. In this case, some products decreased, like the wood because they couldn’t use it, but the long-term benefits compensated for it. This was the initiative of one village chief, but the people followed it. There was some social pressure not to be “that person” who cuts the trees along the river.

Q: Are there any plans for the next steps of the research?

A: I think it’s important to figure out which type of land use management makes sense in this particular area and be aware of the tradeoffs. With this research, we can show that local people are already taking action and sometimes they just need an external facilitating role to help them scale up what is already happening, so they can build on the practices that make sense for them and the environment. The research shows the big trends and effective strategies are already in place even without much external help. The external help can be redirected to support what makes sense.