Published on 5 December 2022 by A. Muh. Ibnu Aqil Indonesia

As hydrometeorological disasters are expected to pick up with the rainy season reaching its peak, Indonesia is encouraged to build facilities to better predict and cushion the impacts of climate change on disaster risks.

The Meteorology, Climatology and Geophysical Agency (BMKG) has noted that Indonesia would likely experience high rain precipitation in 2023, which poses the threat of wet hydrometeorological disasters such as floods and landslides.

National Research and Innovation Agency (BRIN) climatologist Edvin Aldrian said that in the past three years the weather in Indonesia had been rather wet due to the impact of La Nina.

He said El Nino and La Nina were still the main factors for hydrometeorological disasters in Indonesia amidst global climate change.

“The El Nino will induce more land and forest fires, while the La Nina will induce flooding,” Edvin said in early October.

He said that Indonesia needs to improve its climate and weather prediction system so it could anticipate the proper mitigation efforts should Indonesia either face an El Nino or La Nina influenced weather each year.

The BMKG in its 2023 Climate Outlook report expects Indonesia will experience the neutral phase of the El Nino Southern Oscillation (ENSO), meaning neither the wet La Nina nor the dry El Nino will be present.

The agency said the ENSO neutral phase would also mean that there would be a higher risk of land and forest fires in 2023 compared to 2020 to 2022. 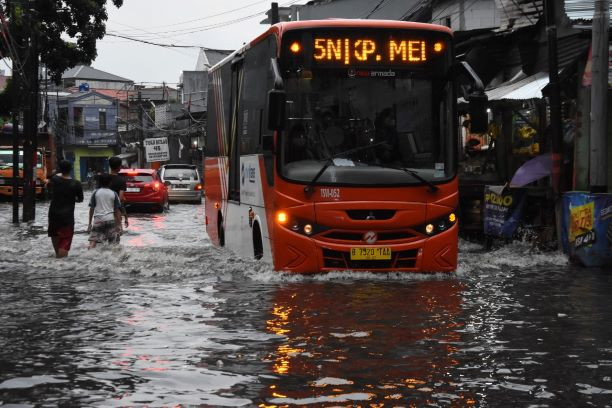 “For example, not a lot of ministries and agencies take the information from the BMKG seriously, such as on weather dynamics or the agency’s latest 2022-2023 climate outlook,” Dzakwan said in late October.

However, he said that in the RPJMN the government could still curb the potential loss to about 50 percent.

“We can’t fully prevent potential losses but we can still reduce it,” Medrilzam said.

He said that some of the intervention efforts by the government to mitigate the potential loss include developing more resilient strains of rice seeds, building water infrastructures especially in population dense islands like Java, or mangrove restoration to prevent seawater creeping into land.

According to the National Disaster Mitigation Agency (BNPB), the archipelago usually recorded wet hydrometeorological disasters during the peaks of the rainy season in December, January and February.

BNPB data shows that Indonesia experienced a rising number of disasters, especially hydrometeorological disasters, in recent years. The BNPB recorded a total of 5,402 disasters in 2021, compared with 1,694 disasters in 2015.

For its part, the Jakarta administration has said it is continuously working to make sure that water-related infrastructures in the city are working properly.

Heru added that he aimed to complete about 4.8 kilometers of the river normalization section during his tenure, which could last until 2024. The project was initiated in 2013 along a designated 33 km of the Ciliwung River in Jakarta. However, as of 2017 only about 16 km of the river has been normalized.