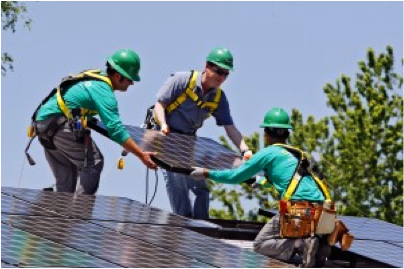 That’s the summation of a new report by the International Renewable Energy Agency (IRENA), and it represents a 14 percent increase over the agency’s previous estimate last year. At around 2.3 million, solar accounted for the bulk of the jobs, as falling prices in the US and abroad incentivized new installations and hires. Along with wind, IRENA also found solar to be the most dynamic market. That said, in terms of raw jobs numbers, the wind market pulled even with biomass at 800,000, while liquid biofuels supplied 1.4 million.

In particular, the numbers show a shift from the developed world to developing countries as the main bases of operations for renewable growth. In China alone, solar installations increased five-fold from 2011 to 2013, providing the demand that’s largely fueled solar’s momentum. IRENA also pointed to skills shortages among global workers as one factor that could hold back further growth, though that kind of thing is hard to disentangle from the previous fall-off in world demand from the global recession.

At 2.64 million, China is the world’s dominant renewable energy employer. The European Union comes in second at 1.245 million, and Brazil is third at 894,000. That leaves the United States in fourth with 625,000 renewable energy jobs.

The EU boasted 1.2 million renewable energy jobs as of 2012, but that hides a considerable degree of turmoil: wind has grown as solar has shrunk, thanks to policy changes and the ongoing effects of the global recession. Spain is in full retreat on renewable jobs on all fronts, leaving most of the growth driven by Germany and the United Kingdom.

Solar is also a big driver in the United States, hitting 143,000 across all solar technology — mainly photovoltaics — in 2013. That’s a 20 percent rise over 2012 and a 53 percent rise over 2010. Almost half the jobs are in installation, with manufacturing splitting the rest with project development and sales. Wind in the U.S. is still rising, but it slowed considerably thanks to the stop-and-go nature of the wind energy production tax credit.

“With 6.5 million people directly or indirectly employed in renewable energy, the sector is proving that it is no longer a niche — it has become a significant employer worldwide,” IRENA director-general Adnan Z Amin told the Guardian.

Admittedly, the data suffers from some limitations. The year with the latest data varies between different global regions. And differences in methodology for the less prominent renewable sources like solar heating and cooling can lead to big — but artificial — swings in the numbers for these niches. Even though China has almost half the world’s capacity of small hydropower, the country provides no numbers on employment in that market at all.