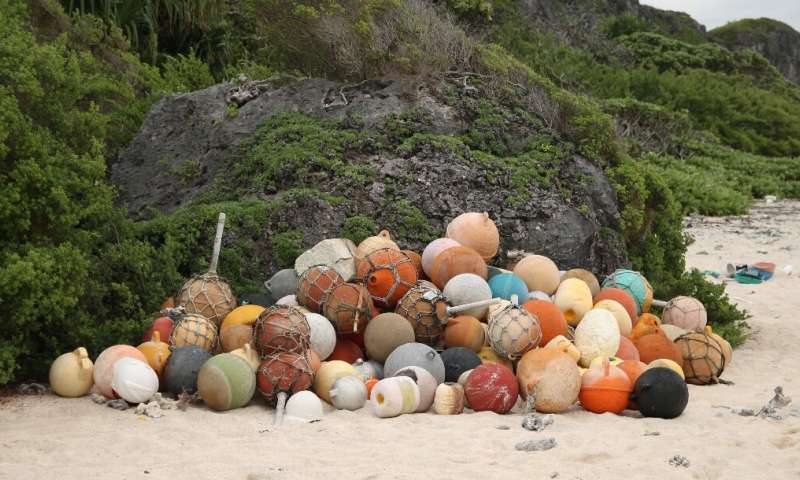 A pile of collected fishing bouys on a beach on Henderson Island, an uninhabited part of the Pitcairn archipelago in the South Pacific Ocean

Floating plastic garbage has swamped a remote Pacific island once regarded as an environmental jewel and scientists say little can be done to save it while a throwaway culture persists.

Henderson Island is an uninhabited coral atoll that lies almost exactly halfway between New Zealand and Peru, with 5,500 kilometers (3,400 miles) of the ocean in either direction.

Despite its extreme isolation, a freak confluence of geography and ocean currents means Henderson has one of the highest concentrations of plastic pollution on the planet.

"We found debris from just about everywhere," said Jennifer Lavers, an Australian-based researcher who led an expedition to the island last month.

"We had bottles and containers, all kinds of fishing stuff and it had come from, well, you name it—Germany, Canada, the United States, Chile, Argentina, Ecuador.

"It was a real message that every country has a responsibility to protect the environment, even in these remote areas."

Henderson lies at the center of the South Pacific gyre, a vast circular ocean current that runs anti-clockwise down the east coast of Australia and up the west coast of South America.

The gyre should be a boon for the 10-kilometre-by-five speck of land, carrying rich nutrients into the waters surrounding Henderson to feed huge colonies of sea birds. 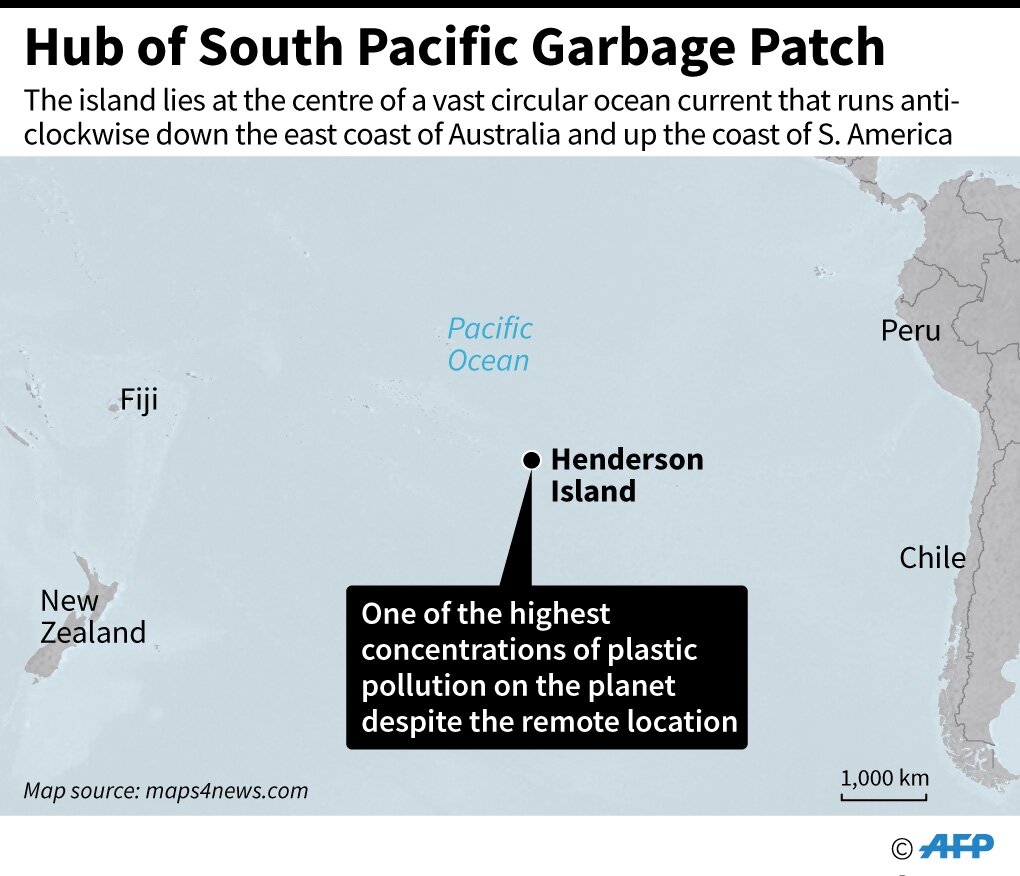 Map locating Henderson Island in the southern Pacific Ocean, which, despite its remote location, has one of the highest concentrations of plastic pollution on the planet.

The atoll's ecosystem is so rich that Henderson was included on the UN World Heritage List in 1988, with the body hailing it as an untouched paradise.

"As one of the last near-pristine limestone islands of significant size in the world, Henderson Island retains its exceptional natural beauty with its white, sandy beaches, limestone cliffs, and rich and almost undisturbed vegetation," it said.

But three decades later, the gyre has become a marine conveyor belt dumping endless waves of plastic detritus onto Henderson's coast, making it the hub of what has become known as the South Pacific Garbage Patch. 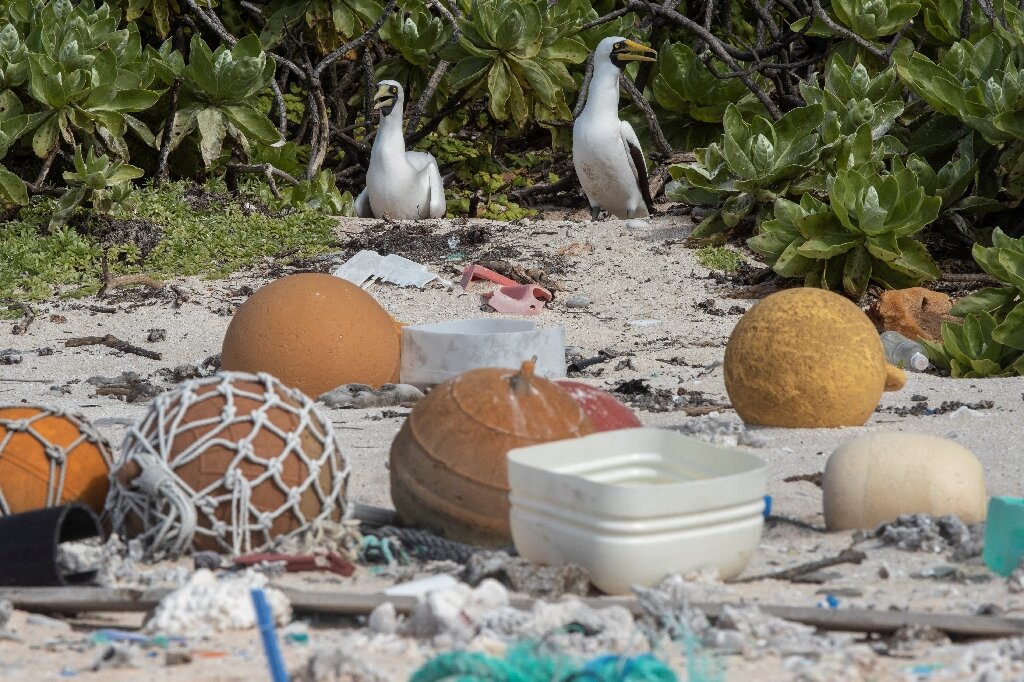 Lavers led her first expedition there in 2015 and on the island's East Beach found there were about 700 items of plastic per square meter, one of the highest concentrations found anywhere in the world.

Compounding the problem, the churning waves have reduced more than half the waste to tiny particles almost invisible to the human eye, making them impossible to clean up but easily digested by wildlife such as birds and turtles.

Lavers organized a clean-up effort on her most recent trip to the island last month and her team collected six tonnes of plastic garbage from the beach over two grueling weeks.

They were unable to take away the rubbish because their ship could not find a safe mooring on the rugged coastline, instead of storing it above the high-tide line for future removal. 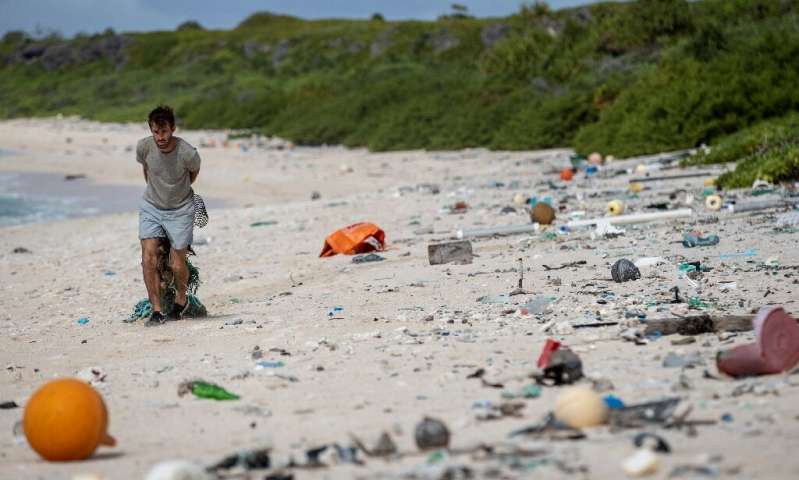 Lavers admitted it was "heartbreaking" to make such a mammoth effort only to see more garbage floating ashore where they had just cleaned.

"We'd be having our lunch and watching it replenish in real-time as things like buoys and bits of rope washed onto the beach," she said.

The marine scientist, who plans further trips to Henderson in 2020 and 2021, said the experience underlined the fact that clean-ups were not a long-term solution to the ocean's pollution crisis.

"It just speaks to the importance of shutting off the tap at the source," she said, calling for tighter restrictions on single-use plastics.

"There's already so much debris in the oceans, we really need to do all we can to prevent any more getting out there."