Mothers cool their children from the sticky summer heat with hand-held fans while others rest on hospital floors, holding drips, waiting for a free bed.

This is the worst outbreak Bangladesh has ever seen. Five times as many people were infected in August than the whole of 2018, and so far this year 57 people have died. 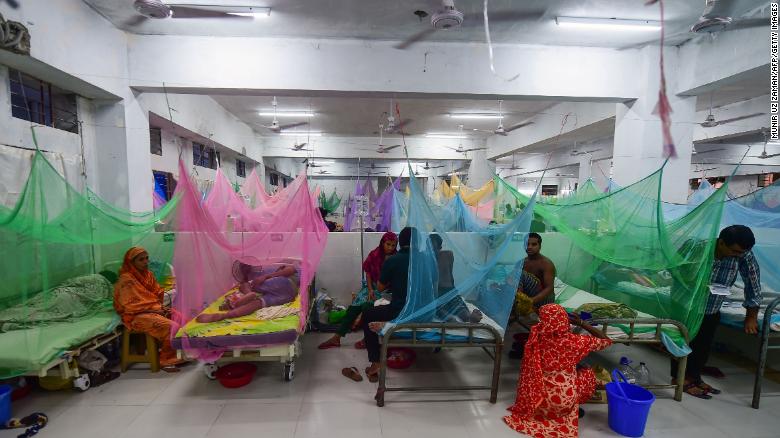 Bangladeshi patients suffering from dengue fever receive treatment at the Shaheed Suhrawardy Medical College and Hospital in Dhaka on September 3, 2019.

It's a similar story across the region. Cambodia, Laos, Malaysia, Singapore, Sri Lanka, Thailand, and Vietnam have all reported higher than normal cases of the disease and deaths compared to last year. And the Philippines has declared a national dengue epidemic -- 1,107 people have died there since the start of the year and more than 250,000 have been infected.

Dengue is a seasonal, mosquito-borne disease commonly found in hot, wet regions of the tropics and subtropics during the rainy months.

Scientists say hotter, wetter weather brought on by climate change has created ideal conditions for female mosquitoes to lay their eggs. Not only are there more mosquitoes, but the rapid urbanization occurring in many Asian nations means that susceptible populations are living in closer contact with disease-carrying insects.

Add to the mix inadequate or unprepared health services and the circulation of a virus, and you have the ingredients for an outbreak of epidemic proportions -- and one that is likely to spread.

The 'break-bone' fever and climate crisis

Dengue is a viral infection transmitted by the Aedes mosquito, the same insect responsible for spreading Zika, chikungunya and yellow fever. It causes flu-like symptoms, including piercing headaches, muscle, and joint pains, fever and rashes, though only 25% of those infected show symptoms. Extreme cases can bring bleeding, shock, organ failure, and potentially death.

It's the most rapidly spreading mosquito-borne viral disease in the world, increasing 30-fold in the past 50 years. While it was once found in only nine countries, today the disease is endemic in more than 100 -- putting more than half the world's population at risk, according to the World Health Organization (WHO).

There have been numerous studies on the link between climate change and mosquito-borne diseases and experts say the climate crisis is playing a major role in dengue's spread.

Scientists have repeatedly warned that rising temperatures are triggering more extreme weather events, and a warmer, wetter world could put us at greater risk of vector-borne diseases -- those transmitted by mosquitoes, ticks or other organisms.

Bangladeshi patients suffering from dengue fever rest on the floor of a hospital ward in Dkaha.

One recent study suggested that 1 billion more people might be exposed to mosquito-borne disease by 2080 as temperatures continue to rise with the climate crisis.

Dengue-carrying mosquitoes thrive in urban areas and lay their eggs in shallow pools of water, in household containers, buckets, even upturned bottle caps. But environmental changes can affect how quickly viruses replicate in mosquitoes and how long they live, increasing the risk to humans.

"As the average temperature increases the survival of mosquitoes and the actual replication of the pathogen with mosquitoes becomes more efficient," said Dr. Rabindra Abeyasinghe, Coordinator of Malaria, Other Vectorborne and Parasitic Diseases, at the WHO's Regional Office for the Western Pacific. "So the mosquitoes only need to survive for shorter periods of time."

Since the start of the year, more than 7 million people have been displaced worldwide as a result of disasters such as flooding, cyclones, and droughts -- a phenomenon described by the researchers at Internal Displacement as becoming the norm.

Lowe said that these changing patterns can cause the dengue season to shift "making it harder to know when and where an epidemic might occur."

2019 is also an El Nino year, a weather phenomenon that heats up the atmosphere and changes circulation patterns around the globe -- and the usually rainy Southern Asia becomes abnormally dry and experiences droughts.

Abeyasinghe said it is one thing to have an intensive monsoon season where it rains steadily for a few weeks, but quite another to have showers that "are scattered over a number of months, creating multiple opportunities for mosquito breeding and prolongs the survival of mosquitoes as opposed to a short, monsoon season."

As the planet gets warmer, scientists say, mosquito-borne diseases will continue spreading farther north. A recent study found that rising global temperatures caused by the climate crisis could see the female Aedes aegypti mosquito which carries dengue -- along with other diseases such as chikungunya, yellow fever and Zika -- migrate to areas where it was not endemic before, with Europe, the US, East Asia and parts of Central America, East Africa, and Canada seeing large increases in risk.

Modern lifestyles are also to blame

But climate is just one factor in dengue's spread. We travel around a lot more than 50 years ago and it's not just souvenirs that we bring back from trips abroad.

"People are able to travel across the globe within a few hours and that certainly facilitates the spread of dengue and can allow the virus to establish in places where it wasn't before," Lowe said.

Even global trade can contribute to allowing invasive mosquito species to establish in new places as the insects and their eggs can be transported in tires, shipping containers, and even hitch a ride on planes. Some airlines, particularly in Australia and New Zealand, spray commercial planes to kill any mosquitoes on board before passengers disembark. 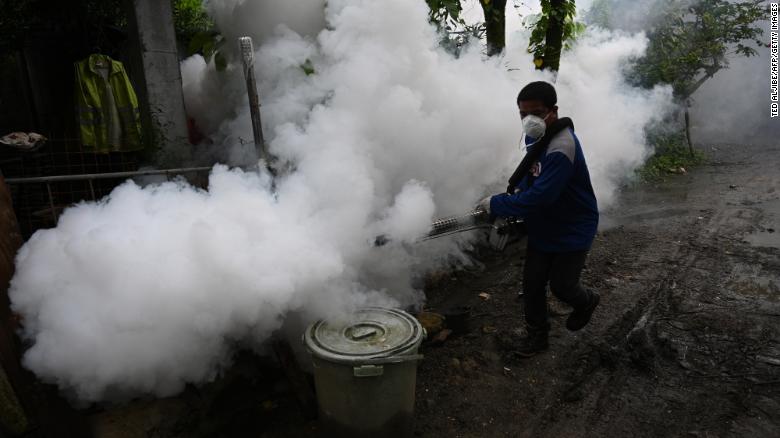 A municipal employee operates a fogging machine to kill mosquito larvae to fight the spread of dengue at a village in the town of Antipolo, Rizal province, east of Manila.

The WHO said the threat of a possible dengue outbreak now exists in Europe as local transmission was reported for the first time in France and Croatia in 2010 and imported cases were detected in three other European countries. In October 2012, an outbreak of dengue occurred in Madeira, Portugal, resulting in more than 2,000 cases in a country where the disease is not normally found.

There is a growing chorus among experts saying it's time policymakers start to prepare for the consequences of climate change and its effect on the spread of infectious diseases.

"The stark reality is that longer hot seasons will enlarge the seasonal window for the potential spread of vector-borne diseases and favor larger outbreaks," Dr Giovanni Rezza, Director of the Department of Infectious Diseases at the Istituto Superiore di Sanitá in Rome, Italy, said in a statement. "We must be prepared to deal with these tropical infections."

Rezza said lessons should be learned from outbreaks of West Nile virus in North America and chikungunya in the Caribbean and Italy to "highlight the importance of assessing future vector-borne disease risks and preparing contingencies for future outbreaks."

Field officer Luu Quoc Hung from the World Mosquito Program holds a bag of mosquitoes in the southern Vietnamese city of Nha Trang.

With no reliable vaccine, the main form of disease prevention to date has been mosquito control -- through the large-scale spraying of insecticides. But dengue is becoming resistant to pesticides in several countries where it was once a successful tool in curbing the disease.

The four strains of the virus mean it is difficult to get on top of with effective treatments, however, work is underway to eventually eradicate the disease.

The World Mosquito Program is a nonprofit initiative that uses a naturally occurring bacteria to reduce the ability of mosquitoes to transmit diseases such as dengue.

It's called Wolbachia and scientists at the program inject it into mosquito eggs to make them dengue-resistant and then release the eggs or the fully-grown mosquitoes into communities where dengue is prevalent.

"In each country we are working on, we've got a growing body of evidence that this seems to be a practical and effective way of stopping dengue," said Peter Ryan, Director of Business Development for The World Mosquito Program.

In ongoing field trials in 10 countries around the world, the team has found that mosquitoes passed the Wolbachia bacteria on from generation to generation -- meaning those mosquitoes did not transmit dengue.

The program has been a success in northern Queensland, Australia, where the first trials were held in 2011.

"We've seen almost complete elimination of dengue from areas in northern Queensland where we have now successfully implemented Wolbachia. That's 300,000 people living in areas that had suffered from the scourge of dengue almost every year from the 1980s onwards and we have seen a complete collapse now."

Trials in Vietnam and Indonesia are also delivering positive results.

"The challenge is, how do we scale this quickly to make it an affordable intervention," Ryan said. Their aim is to lower the cost of the program to about $1 for every person it helps, so it can be rolled out in some of the world's poorest nations. Field trials are expected to end in about 18 months.

Progress is being made on the climate front too. Lowe's team is looking at how countries with dengue can set up early warning systems to predict future abnormal climate conditions and help prepare for potential outbreaks.

"We can no longer rely on seasonal averages or average conditions to decide when dengue is going to peak," Lowe said.

Until scientists find an affordable way to stop dengue from spreading, the WHO is focusing on educating people about the disease -- and preventing more deaths.

"What we are encouraging countries to do is focus on better management of patients," Abeyasinghe said. "Because if you manage the patient and you prevent the deaths, what we basically do is we turn dengue into a sort of normal flu-like thing. Which comes and goes."