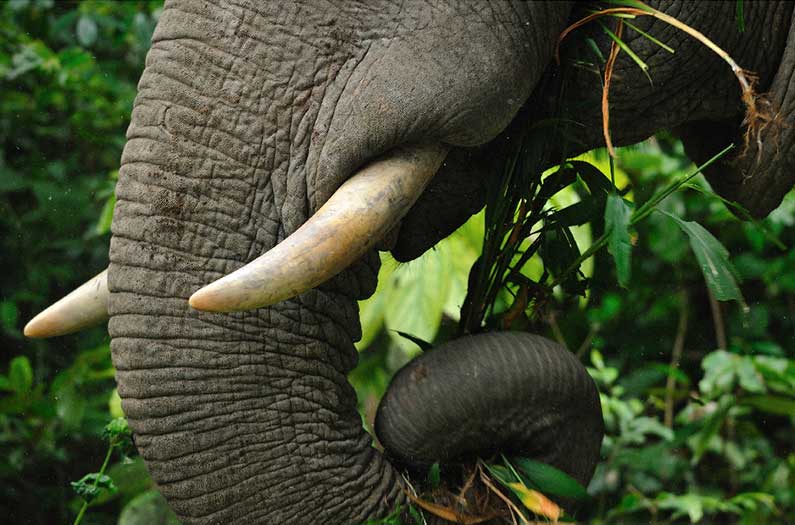 As scientists learn more about the importance of animals to nature’s carbon-sequestering capabilities, they’ve come to understand that extinctions and extirpations are climate issues. Two new studies add powerful detail to that insight.

The first, led by ecologist Fabio Berzaghi of Italy’s University of Tuscia and published in Nature Geoscience, drew on 17 years of data on vegetation structure and species competition in northern Congo. With elephants there to trample vegetation and knock down trees and generally create openings, the resulting assemblage features more slow-growing, dense-bodied trees.

Computational models developed to empiricize these dynamics suggested that standard elephant population densities—about one per square kilometer—translate to about 45 more tons of above-ground biomass for every hectare of forest, with all the locked-up carbon that entails. Conversely, should forest elephants go extinct, leaving those slow-growing trees struggling to compete with a riot of fast-growing species, above-ground biomass would decrease by 7 percent.

That represents about 3 billion tons of carbon, roughly equivalent to fourteen years of carbon emissions in the United Kingdom. And even that is just a small fraction of what those elephants are capable of: in the early 19th century, an estimated one million elephants lived in central African forests. That number is now just 100,000 and declining fast.

In another study, published in Nature Scientific Reports, researchers led by biologist Wirong Chanthorn of Thailand’s Kasetsart University modeled the effects of animal extirpation on tropical forests in southeast Asia. While other research has described how animals influence carbon storage in South American forests, questions remain about whether those in southeast Asia work the same way. Some scientists say they contain more trees that grow from wind-dispersed seeds, reducing the importance of animals for sustaining them.

Yet many south Asian forests don’t contain so many of those trees, note Chanthorn, and colleagues. Their defaunation may be especially problematic. To investigate this, they counted each tree in a 30-hectare forest plot in Thailand’s Khao Yai National Park, which has not been logged or hunted for years and still features an intact animal community.

They found that one-third of above-ground carbon in the plot—about 4,600 tons altogether—resides in trees that grow from seeds dispersed by primates like gibbons and macaques and big-bodied fruit-eaters, including hornbills, sambar deer, bears, and Asian elephants. The researchers’ models suggest that if primates vanish, above-ground carbon storage will decrease by 2.4 percent. The loss of big-bodied fruit-eaters produced a similar decline. Those figures might even be optimistic; the researchers cautioned that their models assumed that other trees would fill niches left by animal-dispersed species, which is not necessarily the case.

Given that regional primate extirpations are “a realistic possibility in the near future,” warns Chanthorn’s team, and that big mammals are “the main targets of poachers in the region,” there’s reason to worry that the carbon storage potential of South Asia’s forests, already compromised by massive defaunation, could shrink even further.

As of now, though, programs to manage forests for climate benefits mostly overlook the importance of animals. “Forests cannot reach their maximum carbon storage potential without the wildlife species that make up their seed dispersal networks,” write the researchers—a maxim that doesn’t just apply to Asia, but to forests everywhere.