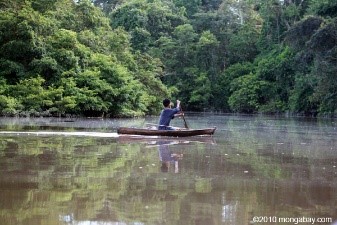 Indigenous boy paddles in the Colombian Amazon. Photo by: Rhett A. Butler.

Since 2008, governments have invested $1.64 billion in funds to kick-start REDD+, or Reducing Emissions from Deforestation and Degradation, the global effort to conserve the world's forests in order to better mitigate climate change. However, a new report by the Rights and Resources Initiative (RRI) finds that same amount of money could have secured the legal rights of indigenous and local people to 450 million hectares of forest, an area 40 percent larger than India.

"Securing the rights of indigenous peoples and local communities is a necessary precursor for REDD+ to be successful, and unfortunately, REDD+ has not yet substantially driven progress in forest tenure—-either in law or on the ground," Bryson Ogden, an analyst with RRI, told mongabay.com.

Research has increasingly shown that indigenous people and local communities are often the strongest protectors of their forests, yet land rights for locals continues to move not only slowly, but haphazardly around the world.

"The amount of forest land secured for community ownership since 2008 is less than 20 percent of that secured in the previous six years, despite decisions by countries to implement REDD+ initiatives which often talk of tenure security as a key requirement for success," said Ogden. "These findings indicate that...REDD+ initiatives are not yet translating into globally significant increases in the area under the ownership and control of indigenous peoples and local communities on the ground."

Yet the report found that clarifying and documenting community rights across large landscapes was relatively cheap: on average just $3.78 a hectare in countries like China, Bolivia, Ecuador, and Mozambique.

Looking at specific examples, the report found that the Indigenous Peoples’ Alliance of the Archipelago (AMAN) plan to map up to 50 million hectares of community forests in Indonesia over the next seven years will cost between $189-500 million. In India, it would cost between $67.5 million and $537 million to secure land rights for the country's 88 million tribal people.

"Countries implementing REDD+ must show a commitment to community land rights, and their commitment has to be for the long-term. It's not necessarily an alternative. Rather, securing land rights for local peoples can help ensure that the investment in REDD+ has stronger and more sustainable results," Ogden told mongabay.com.

Still, a number of countries--including those pushing for REDD+--have either pushed aside indigenous and local rights, or violated them, in order to rapidly exploit forest lands for logging, mining, hydro-power, and fossil fuels.

"Many governments in the developing world have yet to decide if they are going to embrace a more sustainable development path built on inclusiveness and respect for the rights of all their citizens or opt for a short-cut in immediate value by handing out their people's lands and forests to investors or extractive companies," said Ogden.

For example, Peru has leased out 60 percent of its share of Amazon rainforest as oil and gas concessions. This huge swathe of open-for-development land overlaps 70 percent of all indigenous communities in the nation. This tension has resulted in large-scale social unrest including a protest turned violent in 2009 when at least 33 people were killed.

Odgen added that this focus on short-term, exploitative development "often comes at the cost of long-term economic gain since investors, too, fail to prosper when plagued by the financial and reputational risks associated with investing in countries where local land rights are not secure."

The report coincides with the announcement of a new group to help facilitate indigenous and community land rights around the world: The International Land and Forest Tenure Facility. The group is being funded by the Government of Sweden to the tune of $15 million.

"The lack of clear rights to own and use land affects the livelihoods of millions of forest-dwellers and has also encouraged widespread illegal logging and forest loss," said Charlotte Petri Gornitzka, Director General of the Swedish International Development Cooperation Agency.

Illegal logging remains a rampant problem globally, not only destroying forests but often pitting the traditional land owners--local communities and indigenous peoples--against criminal loggers. Most recently, a well-known Ashaninka leader, Edwin Chota Valera, was murdered along with three of his fellow tribesmen, likely for speaking out against rampant illegal logging on their lands.

RRI hopes that new facility can help push both the international community and individual governments to take these land issues much more seriously--and see them as a viable solution to a number of both environmental and social problems.

"The Facility will provide funding and technical support for tenure reform projects in developing countries to increase security of tenure for indigenous peoples and local communities in order to contribute to local and national economic development, forest governance, food security, climate and human rights goals," explained Ogden. "This is particularly important in areas under acute pressure from their governments and extractive industries."

Ogden noted that REDD+ may not be viable in many places if land tenure is not secured first. Indeed, many local communities and indigenous people have viewed the program skeptically with some, such as the Kuna or Guna people in Panama, rejecting it outright.

"There is now strong evidence that the role of tropical forests in combating climate change will only be realized if there is justice for the people whose lives are intertwined with these forests," concluded Ogden. "Stronger rights help Indigenous Peoples and local communities achieve economic development goals. As international efforts to fight climate change and poverty come to a head, the international community needs to embrace these truths."