Organic Agriculture: 'The Way Forward' in the Age of Climate Change 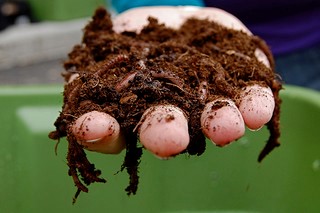 Cling to a food system that contributes to climate change and jeopardizes food security, or adopt a regenerative system that strengthens food security and helps mitigate the climate crisis—"The choice is ours to make," a new report states.

From the Center for Food Safety's Cool Foods Campaign, Food & Climate: Connecting the Dots, Choosing the Way Forward contrasts the dominant, fossil-fuel dependent industrial agriculture system with organic and agroecological systems, and shows how the environmentally-friendly approach is also the best hope for future global food security as it not only reins in runaway carbon emissions but offers climate resilience as well.

The concept of resilience is key, report author and Cool Foods Campaign director Diana Donlon explained in an interview with Common Dreams.

"It's a very important word in terms of climate change," Donlon said. "The definition we use is the capacity of a system to absorb a disturbance and then respond to that disturbance." The response of a resilient system is "vigorous and strong."

"Obviously, the food system is very vulnerable to climate change, and we want to design a system to make sure it is strong and resilient in the face of climate disruption," she said.

Part of organic agriculture's climate resilience, Donlon explained, is in the soil, which contrasts with the industrial system's by being a carbon sink and also helps mitigate periods of deluge and drought, which are set to increase with ongoing climate change.

Rather than being destroyed through chemical inputs and erosion, healthy soils built through organic methods offer "a climate benefit" because they store carbon, Donlon said, and "that is the good news we want to share."

"Soil is really important for water retention." Healthy soil "won't erode, water will be able to percolate well for flood mitigation." At the same time, healthy soil—which has not been doused with herbicides demanded in monocultures and the planting of genetically modified crops—is able retain water better in times of drought.

While wanting the general public to know that their food supply is at risk, Donlon adds that "people sitting on the sidelines have the opportunity to be engaged" in solutions. As interest in food issues continues to swell, why not use this bump to "show that there is one more enormous benefit—carbon sequestration."

Composting is one of the things people can do; in fact, it's a "climate negative" not to because not composting sends things off to the landfill where they "come back to haunt us" through emissions, she said. Yet if this organic matter is added to the soil, there's a climate benefit, and provides more nutrients in the soil for crops to grow.

But what about increased costs that might make those products out-of-reach for many consumers? Donlon said you're just "paying the true cost when you buy organic. When you buy non-organic, it's being subsidized by the taxpayer, by public health, by the water supply."

With organic, "you're paying the true cost of a healthier climate, healthier you and healthier environment. You either pay up front with organic, or you pay down the line with industrial agriculture in terms of climate, an unhealthy child with food allergies or a chronic condition, or pay by contaminating groundwater or by loss of biodiversity."

Donlon said she hopes the report can be the start of a dialogue and part of "a campaign that's trying to be proactive about climate change, and not be overwhelmed that it is hopeless."

"People tend to think of organic agriculture as 'alternative,'" Donlon added in a statement. "In the face of a changing climate, the report shows that methods that work in concert with powerful natural systems are the way forward."