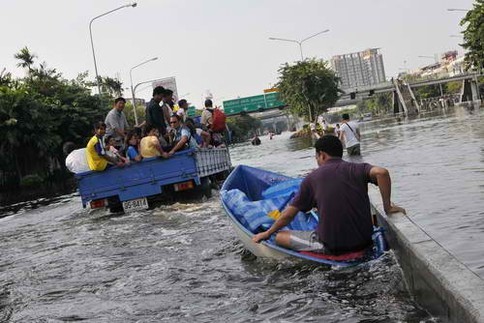 An IPCC report set to be released at the end of March stated prediction of the Asian region being exposed to more powerful tropical cyclones that would result in more loss of life and destruction. Image: 1000 Words / Shutterstock.com

Millions of people in vulnerable areas, such as some parts of Asia, will have to deal with a worrying scenario of conflicts, food crises, flooding, droughts and huge economic losses caused by climate change by the end of the century, according to the leaked draft of a forthcoming international climate report.

The latest report of the United Nations panel, the Intergovernmental Panel on Climate Change (IPCC), looked at the growing threat of climate change and on how human and natural systems are expected to address the “widespread and consequential” impacts.

The leaked document, which is yet to be finalized by hundreds of international scientists and is scheduled to be release by end of March 2014, is the second of the three reports of the IPCC’s scientific assessment on climate change.

The report also finds other alarming and devastating impacts from climate change revealing that hundreds of millions of people, mostly in Asia, will be forced to move due to coastal flooding and land loss as sea level rise.

Philippines most at risk

By the middle of this century, Asia’s urban population will increase by 1.4 billion and will account for over 50 per cent of the global population, according to the IPCC report.

Asia, which includes the Philippines, experienced the highest number of weather- and climate-related disasters in the world during the period from 2000-2008 and suffered huge economic losses, accounting for the second highest proportion (27.5 per cent) of the total global economic loss.

A large proportion of Asia’s population lives in low elevation coastal zones that are particularly at risk from climate change hazards, including sea-level rise, storm surges, and typhoons. Half to two-thirds of Asia’s cities with 1 million or more inhabitants are exposed to one or multiple hazards, with floods and cyclones being the most important.

Climate change threatens large parts of south, east and southeast Asia, which are  already exposed to a high degree of cumulative climate-related risks.

“For example, Asia  has more than 90 per cent of the global population exposed to tropical cyclones and more powerful tropical cyclones would result in more loss of life and destruction as illustrated by Super Typhoon Haiyan, in the Philippines in 2013,” the report stated.

In a recent interview, Rosa Perez, a climate scientist from the Manila Observatory and one of the authors of the latest IPCC report, told Environews.ph that most of the content of the assessment report deals with vulnerability and adaptation.

Perez revealed that much of the results of the IPCC’s Working Group II report derived from the Special Report on “Managing Risks of Extreme Events and Disasters to Advance Climate Change Adaptation” (SREX) which was released last year. The report, where Perez is also one of the authors, tackles the challenge of understanding and managing the risks of climate extremes to advance climate change adaptation.

Perez added that the SREX assesses climate change influence on the threat of natural disasters and how countries can better manage expected changes and risks associated with changes in the frequency of occurrence and intensity of severe weather events. The report also considers the detection of trends in extreme events and the attribution of these trends to human influence.

“This is very much relevant to the Philippines as we are in the top five countries in the world most vulnerable to the threats of extreme weather/climate events,” Perez said.

The document said that climate change will compound the many stresses caused by rapid urbanization, industrialization, and economic development. Furthermore, climate change is expected to adversely affect the sustainable development capabilities of most Asian developing countries by aggravating pressures on natural resources and the environment.

Climate change will also impact industry both directly by affecting industrial production and indirectly by affecting the cost of infrastructure and potential damages. It will likely reinforce existing inequalities, disrupt the social fabric of communities and cities, and exacerbate poverty.

The report enumerated that Tokyo, Delhi, and Shanghai are located in areas with high risk of floods and climate change threatens to increase their frequency and intensity.

The combined effect of climate change and over-withdrawal of groundwater in many Asian cities, such as Bangkok, Manila and Tianjin will likely result in land subsidence and may increase hazard exposure due to coastal inundation and sea-level rise.

Climate change also threatens to disrupt basic services such as water supply, sanitation, energy provision, and transportation systems, which has serious implications for local economies and in some cases could lead to mass migration.

Impacts on agriculture and food security

The impacts of climate change on food production and food security in Asia will vary by region, however, many regions are expected to see a decline in food productivity, with the largest numbers of food-insecure people located in South Asia, the report said.

Sea level rise also threatens many Asian coastal areas and is projected to inundate low lying areas which would negatively affect rice growing regions. Fisheries, a major source of livelihoods and protein for many countries, are also projected to be negatively impacted by climate change, especially in South and Southeast Asia.

Warming ocean temperatures, ocean acidification, and the loss of coral reefs would greatly decrease the abundance of marine fisheries, negatively affecting many countries in south and Southeast Asia.

Impacts on health, security and livelihood

Climate change impacts are not limited to rural populations and will impact urban populations. Based on the report, it will also have an impact on water resources, agriculture, coastal areas, resource-dependent livelihoods, and urban settlements and infrastructure that will have implications for human health and well-being and ultimately affect human security in Asia.

In many parts of Asia, the changing climate will likely exacerbate rural poverty due to impacts to important crops, such as rice, and increases in food prices and the cost of living.

The report, however, said that should climate change reduces crop productivity as expected, producers in food exporting countries, such as Indonesia, the Philippines, and Thailand, would benefit from global food price rises and reduce poverty, while countries such as Bangladesh would experience a net increase in poverty of 15 per cent by 2030.

The report highlighted that terrestrial systems in many parts of Asia have responded to recent climate change with shifts in the timing of blooming, growth rates, the distributions of plant species.

Coastal and marine systems in Asia are under increasing stress from both climatic and non-climatic threats.

Sea-level rise will likely contribute to coastal erosion, especially in the Asian Arctic, where rising sea levels are expected to interact with melting permafrost and a lengthening of the ice-free season. In South and Southeast Asia, mangroves, salt marshes, and seagrass beds may shrink due to sea-level rise, while coastal freshwater swamps and marshes will be vulnerable to saltwater intrusion.

Warming ocean temperatures and ocean acidification are expected to continue to damage to coral reefs with substantial impacts to regional livelihoods and economies. Marine biodiversity is expected to increase at temperate latitudes as warm water species expand their ranges northwards, but may decrease in the tropics if thermal tolerance limits are exceeded.

The report added that increased droughts will also impact lowland Southeast Asia, and together with logging and fire, could greatly increase the vulnerability of this already fragmented landscape to fire, smoke, and air pollution.

Cyclone intensification and sea-level rise could increase coastal flooding and would be further exacerbated by the loss of coral reefs and mangrove forests which reduce wave damage.

The report highlighted that water resources are critically important in Asia due to the massive population, which is reported to be about 4.3 billion in 2013, or approximately 60 per cent of the world population. In addition to climate change, increased water demand and lack of good management will increase the scarcity of freshwater for large portions of Asia.

It added that population growth and increasing demand arising from higher standards of living would worsen water security in many parts in Asia and affect many more people in future.

Declines in rainfall and river runoff will undoubtedly affect millions of people and may lead to increased tension due to water scarcity in some regions, especially arid areas. Integrated water management strategies could help adapt to climate change, including developing water saving technologies, increasing water productivity, and water reuse.