‘It takes a village’ to stop climate change? 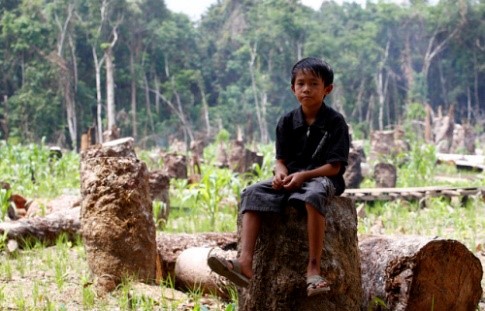 A child sits on a tree stump in Central Kalimantan, Indonesia. Forest communities like his can help curb carbon emissions, research overwhelmingly shows — if they are granted legal rights to their forests. Achmad Ibrahim/CIFOR photo

Editor’s Note: A version of this article was originally published in The Jakarta Globe.The author is the Dean of the Ateneo School of Government in Manila; a lead negotiator for the Philippines on REDD+; and a member of the Board of Trustees of the Center for International Forestry Research (CIFOR).

In December, climate negotiators will converge in Lima, Peru, for the 20th Conference of the Parties (COP) of the UN Framework Convention on Climate Change – a crucial step in the process that is supposed to end with a new climate change agreement at the 2015 COP in Paris.

The role of deforestation in global climate change is well-known. The world is losing 50 soccer fields’ worth of forests every minute, accounting for 11 percent of all annual greenhouse-gas emissions. However, governments have too often overlooked or undervalued the need to strengthen community forest rights in order to reduce emissions from deforestation.

Local and indigenous communities have legal or official rights to at least 513 million hectares of forests, which store about 37 billion tons of carbon. If governments recognized more rights for forest communities and did more to protect those rights, that number could increase significantly.

The forests of the Asia-Pacific region are especially important — according to a report by the Center for International Forestry Research (CIFOR), they cover almost 22 percent of the world’s land area and account for 19 percent of its forests.

Many communities have weak or no legal rights to their forests because governments hold legal ownership and management authority. In Indonesia, at least 41 million hectares of indigenous community forest are legally owned and managed by the government; the communities that call the forest home had no legal rights to it until May 2013, when Indonesia’s Constitutional Court ruled that indigenous people have the right to manage forests where they live.

Government control can mean granting rights to commercial operators to clear forest for timber, palm oil, pulp production, or mining. In recent years, the Liberian government used its legal claim to most of the country’s land and forests to authorize the commercial use of about 50 percent of its forested land for commercial logging, palm oil, and mining. Yet communities depend on these forests for their livelihoods and have deep cultural and historical connections to the forest.

Reforming legal systems by strengthening community forest rights will protect the forest as a carbon sink rather than turning it into a source of emissions. Governments that have legally recognized community forest rights — and that protected those rights through official mapping and registration, expelling illegal settlers and loggers, and providing technical assistance — have seen communities resist deforestation pressures and maintain healthy forests.

In Guatemala, legally recognized community forests in the Petén Maya Biosphere Reserve, a UNESCO World Heritage Site, experience 20 times less deforestation than so-called strictly protected areas of the reserve where cutting of trees is forbidden. As is often the case, ostensible strict protection by government results in de facto open access with unchecked illegal encroachments and logging. By contrast, with government support, communities in the reserve are adept at maintaining their forests’ health.

In Mexico, about 8.1 million hectares of forests are under community forest management. In one area of the Yucatán region, community managed forests show a deforestation rate of practically zero (0.002 percent), a rate 350 times lower than in a neighboring, strictly protected government reserve.

Communities can partially overcome government actions that weaken their forest rights. In Honduras’ Río Plátano Biosphere Reserve, communities created the Union of Agroforestry Cooperatives for mutual support in the face of inadequate government protection and support. For years the government failed to timely approve forest management plans, provide financial support, or expel illegal settlers. As a result of the union, these communities’ forests experience deforestation rates up to 140 times lower than in other areas of the reserve.

In the Bosawas Biosphere Reserve of Nicaragua, the government issued at least six titles to indigenous people, who operate under unofficial sustainable-use plans. Yet the government has largely failed to protect indigenous lands in the Bosawas from encroachment by settlers. Communities responded: By policing their own borders, they saw a deforestation rate 14 times lower than in other parts of the reserve.

Elsewhere, the situation is less rosy.

Communities in countries where governments actively undermine their forest rights succumb to deforestation pressures. Some Peruvian indigenous community forests suffer the worst deforestation in the Amazon, losing up to 51 percent of their forests — mostly to oil and gas concessions, which cover 75 percent of the Peruvian Amazon. (In part of Peru’s Madre de Dios, fully 87 percent of indigenous community forests are covered with mining, oil, and gas concessions and other conflicting land uses.)

Outside of Latin America, in Papua New Guinea, almost all forests are legally owned by communities (97 percent), but this is largely a paper right because the government routinely allocates indigenous community forests for use as palm oil plantations. The government has issued leases to private companies covering about 4 million hectares — an area the size of Switzerland. If logged and converted for palm oil production as planned, the deforestation would release almost 3 billion tons of CO₂.

To address community forest rights as not just a forest or land problem but a climate change problem, governments, civil society and other stakeholders can: