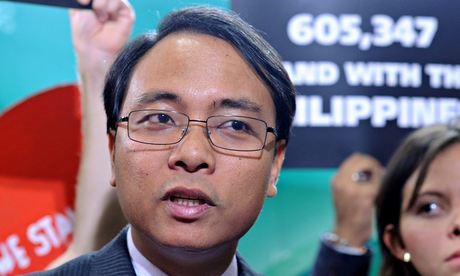 When we think of hunger strikes historical figures tend to come to mind: Gandhi, the suffragettes, Irish republican Bobby Sands. But what would it look like if we transplanted this established form of protest into the digital age?

The recent fast for the climate campaign may give us a starting point. The campaign has drawn its inspiration from Philippines climate change commissioner Yeb Sano's 13-day hunger strike at the post-Typhoon Haiyan's COP19. This individual protest has grown into an active social media campaign for climate change action. Faith groups, environmental NGOs, youth groups and grassroots organisations from across the globe are congregating around the hashtag #fastfortheclimate to call for a collective fast at the start of every month.

Sano, who following COP19 has become the unofficial face of the movement, describes it as "a spontaneous global phenomenon".

"Since my original fast it has snowballed into #fastfortheclimate. The social media campaign is now moving into a new era of more organised collaboration among the participating organisations. This month we launched an online platform."

Sano recognises that the campaign has yet to see concrete results, but argues that it is not just another voice in the awareness-raising chorus. "Fast for the climate has done what we have found difficult to do in the past decade – which is to unify the voices of civil society. The organisations collaborating in this movement represent a very broad spectrum of views and voices."

This achievement may have something to do with the emotive language of the campaign. When questioned on its aims and impact, Sano speaks in terms of a "planetary awakening" and LWF Youth, an active supporter of the movement, describes it as an example of "spiritual solidarity". The campaign is not only going for the hearts and minds of the public, but seeking engagement on a deeper level. Sano sees fasting as the most effective means of achieving this.

"Fasting is one of the most powerful means of peaceful action to drive change. It is both a symbolic and active form of transformational change. People fast become agents of change and instruments of justice."

So how should we evaluate this type of campaigning and what should we anticipate as its outcome? Can a spiritual awakening that hangs on a hashtag be anything more than a gimmick? And will the virtual unity created by these individual commitments lead to any tangible progress?

While Sano is mindful of the ethics behind heartstrings campaigning, for him it's important not to lose sight of emotional engagement as a trigger for understanding and for action. The crucial thing is to "make people believe in the story before it is too late", says Sano.

"Climate change has always been esoteric for many and has had its own set of technical jargon that only climate negotiators seem to comprehend. The speech I delivered on behalf of my country in the face of Haiyan gave climate change a human dimension."

Sano recognises that his advocacy has been given extra gravitas by his nationality. "A message is always made more effective by a credible messenger. A country that sits high in the rankings of climate risk, such as the Philippines, sits on a moral high ground, and puts you in a unique position to negotiate. People search for leaders, and leaders who weep with their people send a very powerful image." If campaigns are best judged on their results rather than the medium of the message, then it is too early to deliver a verdict on #fastfortheclimate. While a growing and diverse movement, it remains to be seen how long it will be able to sustain its momentum.

The jury is also out on whether this campaign is a gimmick or has any real power. Perhaps this is a false dichotomy and #fastfortheclimate can be both. Perhaps it also depends how far Sano's original message will be hijacked by international NGOs. What is clear, though, is that campaign's progression very much depends on Sano, as a 'voice of the victims'.