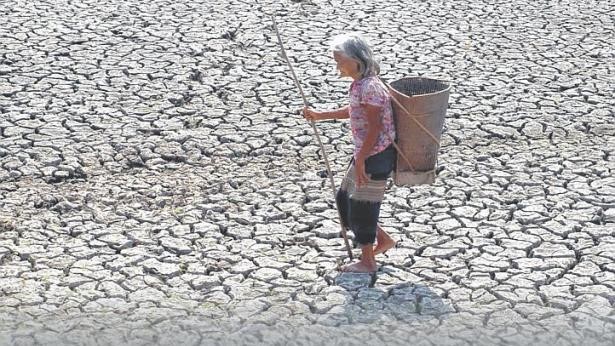 Saline water renders farmlands in Vietnam very dry and useless. Salt concentrations in the groundwater have been measured up to 3:1,000, far higher than Health Ministry guidelines which stipulate that salt concentration levels must be less than 0.3 per thousand to be safe for daily use. -- PHOTO: VIET NAM NEWS/ASIA NEWS NETWORK

HANOI - Pham Thi Ly buys fresh water every 10 days from a well operator in another commune during the dry season.

To ensure her children have clean drinking water, she has to buy the bottled stuff. The dry season typically runs for four months and this buying of water puts a dent into whatever she earns from fishing.

But Mrs Ly has no choice - there is no fresh water to be had as the groundwater under the Thua Duc Commune in Vietnam's southern Ben Tre province has become too salty for daily use.

Mr Tran Thai Hoc, a commune official, said contamination goes back at least five years. Salt concentrations in the groundwater have been measured up to 3:1,000, he said, far higher than Health Ministry guidelines which stipulate that salt concentration levels must be less than 0.3 per thousand to be safe for daily use.

Scientists say rising sea levels, a fallout of climate change, endanger not only people who live on the coasts but also those farther inland as salt water seeps into fresh water sources, rendering them unfit for human use. That, in turn, has the potential to wreak havoc on agriculture and the economy.

About 100,000ha of farmland in the Mekong delta, Vietnam's rice hub, have been affected by saline water intrusion, according to the Ministry of Agriculture and Rural Development.

The Vietnamese Mekong delta covers about 39,000km of fertile and alluvial plains and is home to more than 18 million people. Groundwater is among the most important sources of drinking water for millions of people, particularly those living in coastal areas.

In some areas, salt water has intruded up to 60km upstream into local rivers. Desperate for fresh water, poorer residents buy anything from well operators not minding whether the water they buy is clean, as long as it is useable.

"This increases the chance of people getting diseases," said Mr Nguyen Quoc Thai, a doctor from the Department of Infectious Disease at Bach Mai Hospital in Hanoi.

Saline water intrusion is not the only problem that many Vietnamese people face as climate change takes its toll on the country.

The number of severe typhoons has been rising in recent years, while the storm season has been ending later than before.

"The weather tends to be more extreme with storms appearing sooner, stronger every year. In general, the intensity of the storms, measured by wind speed, is believed to have increased by 2 to 11 per cent," said Mr Nguyen Van Tue, head of the Department of Meteorology and Climate Change under the Ministry of National Resources and Environment.

Official figures show that in the last 10 years, natural disasters have killed some 9,500 people and caused damage equivalent to 1.5 per cent of the nation's gross domestic product.

Last year alone, natural calamities claimed the lives of 264 people, injured 800 and caused 25 trillion dong worth of damage. More than 12,000 houses were destroyed and over 300,000ha of farmland devastated.

Minister for Agriculture and Rural Development Cao Duc Phat, who is also the head of the country's Committee for Flood Prevention steering committee, says natural disasters have become increasingly unpredictable and more extreme.

The National Strategy on Climate Change, which was issued by Prime Minister Nguyen Tan Dung in 2011, categorised Vietnam as one of the countries most affected by climate change, with its Mekong delta listed among the three deltas most vulnerable to rising sea levels (alongside the Nile delta in Egypt and the Ganges delta in Bangladesh).

Mr Pham Anh Dung, a resident of a coastal town in southern Bac Lieu province, says he knows little of the term "climate change", but is certain the weather is changing.

"In recent years, the weather has been so unpredictable. The sea level has come up so much that many neighbours of mine are really scared about the possibility of the sea dam breaking," he said.

"But even though we're quite scared, we can't go anywhere. Where can we go? We've been living here and earning our living from the sea forever," he said.

The report, "Fighting climate change: Human solidarity in a divided world", by the United Nations Development Programme (UNDP) estimates that about 22 million Vietnamese people will lose their houses to rising sea levels.

"Seventy per cent of its area will be intruded with saline water and two million hectares of rice will disappear," said scientist Le Anh Tuan from the Institute for Climate Change Studies at Can Tho University.

"Agriculture is the sector that is most affected by climate change, specifically by saline water intrusion and sea level rise," said Mr Tran Thuc, director of the Viet Nam Institute of Meteorology, Hydrology and Environment.

Fully aware of the serious damage climate change could do to the country's development, the Vietnamese government is building new dams and other structures aimed at mitigating the impact of rising sea levels and contamination of ground water.

New, sturdier varieties of rice, which cope better with cold snaps, have been provided to farmers in northern Nam Dinh province, in the hope that they would withstand more extreme weather conditions in the years ahead.

For people like Mrs Pham Thi Ly, what matters now is simply to have enough clean, fresh water for their families to use and drink. (BY THU VAN)