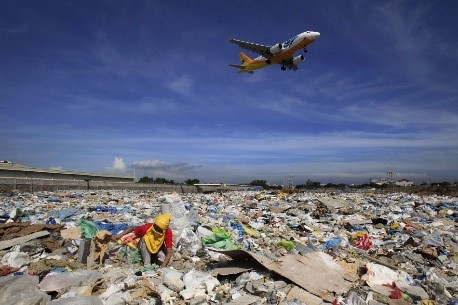 An aircraft flies overhead as a person rummages for recyclables at a garbage dumpsite in Paranaque city, metro Manila June 8, 2014. The United Nations declared "Small Islands and Climate Change" the theme of 2014 World Environment Day, with the year's official 2014 slogan being "Raise your voice, not the sea level". REUTERS/Romeo Ranoco

While most of the dangerous gases that had built up in the atmosphere over the years may have come from countries in the Earth's northern hemisphere, it is the countries however in the south that will bear the impact of the planet's global warming and climate change, a report released by ratings agency Standard & Poor's said.

In a list that included 116 countries, the report disclosed the nations most vulnerable to suffer from climate change were Cambodia, Vietnam and Bangladesh in the top three. Top three bottom ranked were Luxembourg, Switzerland, and Austria. Australia, meantime, is at the 31st least affected.

Standard & Poor's used three sets of data to come up with its list:

"While most sovereigns will feel the negative effects of climate change to some degree, we expect the poorest and lowest rated sovereigns will bear the brunt of the impact," the report said. "This is in part due to their reliance on agricultural production and employment, which can be vulnerable to shifting climate patterns and extreme weather events, but also due to their weaker capacity to absorb the financial cost."

Extreme weather events, especially floods, can be expected to increasingly take a toll on a country's infrastructure and thus productivity, exacerbating weakening endowment of productive infrastructure observable in a number of countries.

Changing patterns of rainfall can reduce agricultural yields via repeated and prolonged droughts, heat waves and wildfires, or floods. The productivity of the broader workforce could also be negatively impacted if weather events affect sanitary conditions negatively, spreading pests or diseases, increasing morbidity.

"Great uncertainty still remains about if, how, and when various economies could be affected by climate change," analysts from Standard & Poor's said.

Ironically, all of the countries included in the Top 20 most vulnerable nations are emerging markets, where almost are located in Africa or Asia.