April will be first month with CO2 levels above 400 PPM 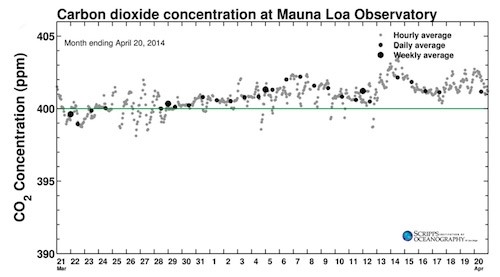 April will be the first time in human history where levels of atmospheric carbon dioxide were higher than 400 parts per million for an entire month, one scientist who monitors the levels said. And they could stay above that mark into July. Photo from Scripps Institution of Oceanography

Carbon dioxide concentrations, as measured at a site atop Hawaii’s Mauna Loa volcano since 1958, surpassed the 400 ppm mark for the first time in recorded history on May 9, 2013. While the particular mark is symbolic, it serves to show how far concentrations have risen from their pre-industrial levels of 280 ppm as fossil fuels such as coal and oil have continued to be burned.

“On some level, watching these milestones be passed is a lot like watching paint dry,” Jason Smerdon, a climate researcher at Columbia University’s Lamont-Doherty Earth Observatory, told Climate Central in an email. “The upward march is neither surprising nor unexpected as a direct consequence of human activities; it is only alarming in the sense that it keeps happening unabated.”

Scientists expected the 400 ppm mark to be surpassed at an earlier date this year — and, indeed, that point came a full two months earlier than last year — and for this year to see the first monthly carbon dioxide average above 400 ppm.

So far, April has already seen daily and weekly average carbon dioxide levels above 400 ppm, the Mauna Loa data show, and that will assuredly continue for the rest of the month, Tans told Climate Central. Levels will continue to rise in May, the typical peak of carbon dioxide levels in the Northern Hemisphere.

“The expectation is pretty firm that May will be higher than April,” said Pieter Tans, a climate scientist with the National Oceanic and Atmospheric Administration.

May is the peak of the yearly CO2 cycle because it is the point at which plants across the hemisphere have woken up from their winter slumber and begin to suck up the carbon dioxide in the atmosphere. The ups and downs of the cycle are seen as smaller wiggles in the overall rise of carbon dioxide over the past half-century as measured at Mauna Loa — the iconic Keeling Curve.

While other greenhouse gases are more potent warmers on a molecule-by-molecule basis, carbon dioxide is considered the most important such gas because it is much more prevalent in the atmosphere and more long-lived than many other chemicals.

How long CO2 levels stay above 400 ppm this year, before a hemisphere’s worth of photosynthesis begins to draw them down, depends on how high they get in May. Tans expects them to peak somewhere between 402 and 403 ppm. If they do reach 403 ppm, levels could stay above 400 ppm into July, he said. (Carbon dioxide levels are even higher in the Arctic, Tans said, running close to 405 ppm right now, as the carbon cycle there has a higher amplitude.)

That higher peak this year means that the 400 ppm level will be passed even sooner next year, Tans said, possibly as early as February. The earlier benchmark happens because the biosphere draws down only a certain amount of carbon dioxide each growing season, leaving behind excess CO2 that hangs around into next year.

In another year or so, CO2 levels could still be at 400 ppm come fall, then eventually will stay above that level for the entire year, “and it will never go below 400 again,” Tans said. Or at least it won’t for many centuries, as the long-lived nature of carbon dioxide in the atmosphere means that its effects will be felt for many human generations, absent efforts to curb emissions or use carbon capture technologies to pull CO2 out of the atmosphere, a controversial prospect.

“This is a very long-term commitment,” Tans said.

The last time atmospheric carbon dioxide levels were this high consistently was anywhere from 800,000 to 15 million years ago, various studies have estimated. And at that time, global temperatures were much warmer and sea levels were up to 100 feet higher.

“Personally, I am alarmed,” Tans said.