5 development issues for the Asia-Pacific region in 2014 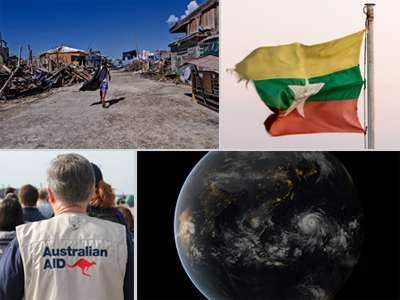 From the continuing ethnic conflict in Myanmar to the catastrophic typhoon in the Philippines, 2013 proved to be a challenging year for Asia-Pacific.

While several countries achieved stellar economic growth that dwarfed that of most Western countries, poverty, hunger, conflict and disasters remain stumbling blocks for progress in the region — and the next 12 months will prove if this part of the world is moving forward or taking a step back in its development.

What does 2014 have in store for Asia-Pacific? Here are 5 of several development issues to watch out for.

1. Disaster response, rehabilitation and mitigation in the Philippines

Post-typhoon recovery efforts in the Philippines will continue to concern aid groups in 2014 given the scale of the devastation and the assistance needed. The relief operations, dubbed the largest in the country since World War II, remain in its infancy and will need considerable time. Haiyan has steered global attention to the importance of disaster prevention and thus will likely impact the future development agendas of multilateral organizations and national governments. Asia-Pacific is one of the world’s most vulnerable regions to natural disasters, and making sure countries are fully equipped in dealing with these situations are crucial as the region moves forward.

Finally emerging after almost half a century of military rule, Myanmar is slowly getting back on the world stage, with development organizations taking more notice and having an increased presence in the country as the Association of Southeast Asian Nations braces for integration in 2015. Just a year ago, the Asian Development Bank resumed operations in Myanmar to assist its democratization and speed up development progress. Japan has also taken a keen interest in putting more focus on Myanmar and its development with a significant portion of its $19.2 billion aid package for Southeast Asia going to the country.

Climate change has been a global development issue the past couple of years, but 2013 showed it’s truly the time to ramp up efforts and fast-track measures to safeguard countries, — especially in Asia-Pacific — from the devastating effects it may bring. ADB has been pushing for more adaptation projects in the past year, and this will continue in the next 12 months, while several national governments including the Philippines has also been active in pursuing a climate-oriented approach in development projects or climate-proofing the budget.

Development efforts dependent on Australian official development assistance will continue to be in limbo, as details of the aid cuts and the integration of AusAID into the country’s foreign affairs ministry set out by the Abbott government are still not clear. Several NGOs have already closed shop, others are in danger of meeting the same fate due to the cuts. On top of that, the integration process is causing serious concern among agency employees, after the government announced that up to 12,000 jobs will be cut from the civil service, although no one knows yet exactly how many will come from AusAID. More details are expected in the next few months as the transition is expected to conclude in the first half of 2014.

Several national elections could also prove to be a turning point for development progress in region. Bangladesh has recently concluded its elections rife with protests in early January, while Thailand will decide its future in February despite ongoing street protests against incumbent Prime Minister Yingluck Shinawatra. Indonesia, meanwhile, is scheduled to have two major elections this year: legislative polls in April and a presidential vote in July. India, on the other hand, will have its general elections in May. The outcomes will affect the medium-term future of each country, as well as the stability and continuity of development programs put in place by local and international NGOs, always wary of political instability. (Lean Alfred Santos)