The fight against devastating climate change on farming

The effects of climate change have had a devastating effect on the Cambodian economy, especially the agriculture sector, costing the country millions of dollars in losses.

In Cambodia, the impact of climate change on agriculture activities, which depend on rain, has caused devastating impact to livelihood which are vulunerable to changing climate factors. The loss of paddy in Cambodia was 70 percent from floods and 20 percent from drought.

It is estimated Cambodia’s gross domestic product (GDP) loss is significantly higher than previous modelling work done in Southeast Asia. Much of the focus of climate change spending has been on mitigation and adaptation measures in relation to natural disasters – but rising temperatures pose a bigger threat when it comes to the economic impact of climate change in Cambodia, according to the Cambodia Climate Economic Growth Impact Model” report. 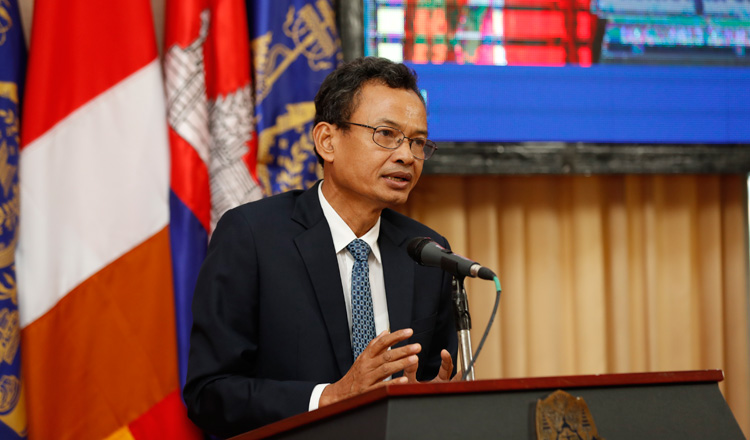 Mak Soeun, deputy director-general of agriculture at the Ministry of Agriculture speaks at a press conference in Phnom Penh. KT/Khem Sovannara

“How big the impact of climate change is on the agriculture sector is something we need to study. However, he said last year more than 325,180 of paddy fields were affected by the drought and 80,410 by flood and damage over 59,000 hectares,” said Soeun.

“Mostly, the impact was on paddy fields and cassava,” he added. Soeun said about 2.5 million hectare of Cambodia’s paddy farms depend on rainfall in the rainy season. The ability to use irrigation systems to cover paddy fields was only 300,000 hectares, the rest depends on rain. “In total, the irrigation system can cover about 600,000 to 700,000 hectares in both the dry season and rainy season,” Soeun added.

He said that Ministry of Agriculture has closely monitored the drought and damage and the ministry is also studying the possibility of restoring the damaged paddy. The ministry says it will evaluate the impact and will assist vulnerable farmers.

Ministry of Environment spokesman Neth Pheaktra said not only do the figures provide evidence of the impact of climate change in the Kingdom, but also the risk global warming poses to its future. He said that between 1996 and 2020, Cambodia witnessed 3,681 floods, 1,375 droughts and 1,917 hurricanes, all of which killed 1,292 people and destroyed 14,761 houses and 1,875 hospitals. Three million hectares of crops and around 1,000 schools were damaged,” he said.

“We cannot begin to determine the amount of money and grief this has cost the country over the years. However, to give some idea, in 2013, floods alone led to Cambodia losing $350 million. Around 300,000 hectares of farmland and 200,000 homes were damaged, with 150 [human] fatalities.

In response, Pheaktra said the government has quadrupled the budget for climate change to around $900 million, spread across 14 ministries and institutions working together under the Climate Change Adaptation Project, which is set to run until 2030.

Soeun, however, added that the Ministry of Agriculture, Forestry and Fisheries has a long-term vision for 2030: Cambodian agriculture will be a modern, competitive, climate-resilient, inclusive and sustainable environment that leads to increased household incomes, prosperity and the wellbeing of the Cambodian people. Soeun added climate-smart agriculture practices aim to increase productivity and income, increase climate resilience and adaptation and reduce greenhouse gas emissions. Research and dissemination of new techniques and the application of climate-resilient techniques are needed.