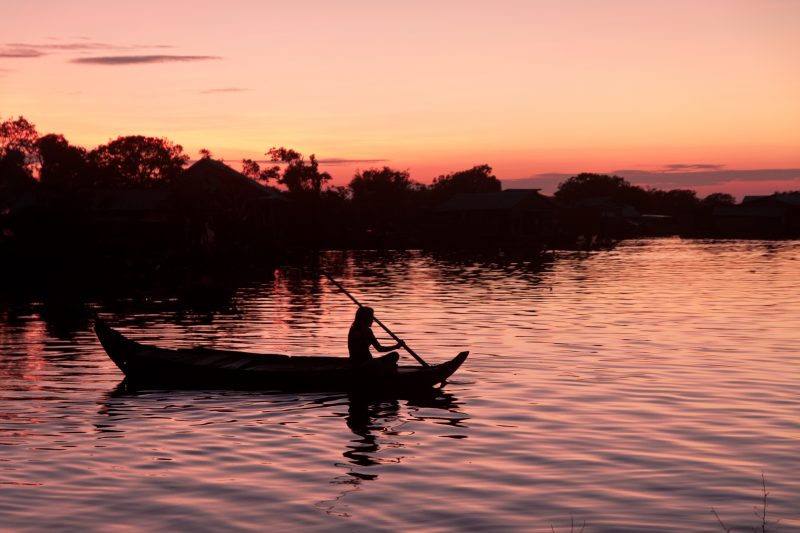 For many people in developing countries, freshwater fisheries are their lifeline.

In Cambodia, for example, millions of people rely directly on the Tonlé Sap lake, the largest lake in Southeast Asia, for their food and income. But overfishing has depleted stocks of fish there, perpetuating poverty in one of the region’s poorest countries.

So, how to boost fish stocks without hampering people’s ability to eat and make a living?

A study recently published in the journal Ecological Modeling by Lee Hannah, senior scientist for climate change biology at Conservation International, and co-authors, found that establishing protected areas within freshwater fisheries can actually help pull local communities out of the poverty cycle.

Question: What was the biggest takeaway from this study?

Q: Aside from the obvious, how are freshwater and marine fisheries different?

A: Marine fisheries use big boats to target a specific fish species and record their catch, so things, for the most part, are pretty well tracked. It’s not perfect, but it’s on a larger scale and more advanced than freshwater fisheries. Freshwater fisheries are usually very small, family-driven and are not targeting a specific species, but rather whatever they can catch in order to eat or sell, and they don’t track their catch. However, we found that despite all of these differences, protected areas — whether freshwater or marine — benefit the communities and people who depend on them.

Q: Where did the idea for this project come from?

A: Communities living in the Tonle Sap region had noticed they were catching less fish and were concerned for their futures, so they actually approached Conservation International asking for help. Now we have been working in the region for almost 10 years studying how external forces, such as climate change and upstream dams, affect freshwater fisheries, and this project is an expansion of that. We were able to adapt to the marine systems model to the Tonle Sap region using data from previous projects with the Belmont Forum to study how local communities could escape the poverty cycle.

We found that benefits of protecting the freshwater fishery increase until you get to 50 percent of the area protected. At that point, access to the lake is so limited that people are unable to reap the full benefits of recovered fish populations. One big consideration with this model is that there are two different ways to implement it. Some families use the fish solely for protein and sell whatever is left, in which case, the protected area should be smaller, allowing families more access to fish, but other families use the fish as income, which means the bigger the fish, the more income, so the protected area should be larger to allow the fish to grow. But, all of that requires that families aren’t fishing hand to mouth.

At first, the benefits do decline since fishers are now unable to access previously used waters, but after a few years — once stocks have recovered — fish from the protected area begin swimming outside of it and into the surrounding community fishing areas. This is known as the “blue halo.”

Q: A rather gloomy recent news report indicated that people living in the Tonle Sap region are stuck in an endless cycle of poverty. What is your response to that?

A: They are in a cycle of poverty, but I think there is still hope. Our model helps determine what exactly is necessary to get out of that cycle of poverty. People are realizing that yes, it’s overfished, but the model shows there is a way out of that and to get more fish out of the lake. Protected areas are going to reduce the fish catch for a while, but in the longer term, somewhat paradoxically, fishing less yields more fish. But, there’s a short-term price for that, and the impoverished fishers are not going to be the ones to pay that price — there must be external assistance, whether from governments or non-governmental organizations, to help them get through that problem and break the cycle of poverty.

Q: What’s the next step for this research?

A: The next thing that needs to be done is to try and test this out in the field, and Conservation International is working with community fisheries to develop alternative income sources so they aren’t so dependent on the fisheries and to establish conservation areas within the fisheries. Our goal is to get to a place where communities are getting better fishery returns. There are a lot of other countries that get huge amounts of protein out of freshwater fisheries in similar settings, and that’s why we wanted to look at the Tonle Sap region because the data we gather can be applied to other countries and help them sustainably manage their freshwater fisheries.