Cambodia's forests are being felled at a shocking rate, as poachers and corrupt officials profit from the black market trade in rare wood species, which is being exported to Vietnam — and beyond. 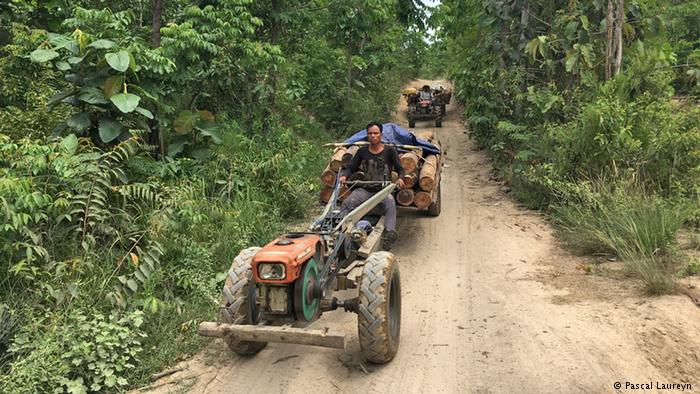 The Aoral Wildlife Sanctuary in Kampong Speu province is just a three-hour drive from Cambodia's capital, Phnom Penh. But the scenery here couldn't be more different than in the sprawling metropolis — even a military outpost in the reserve is peaceful and picturesque. A traditional stilt house has hammocks, chickens, and ice-cold beer. Outside, a few soldiers are playing pétanque as a black pig snuffles the earth.

But behind this idyllic scene in the Cardamom Mountains, a billion-dollar black market is thriving.

Loggers are illegally felling rare and valuable trees to sell in China and Europe, making Cambodia's deforestation rate among the world's worst. And the army itself has been implicated in the illegal trade, which has also been linked to murder.

According to nongovernmental organization Open Development Cambodia, the country is losing its forest at a rate of 2,000 square kilometers (770 square miles) per year, with 7 percent vanishing over the last 12 years. A rich diversity of wildlife — from tigers to douc monkeys — is endangered as a result. 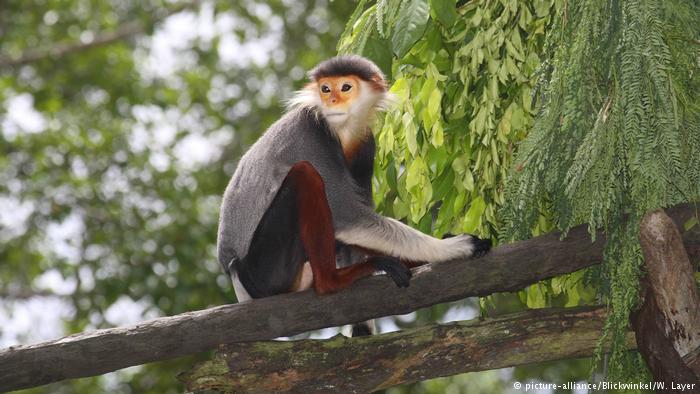 Earlier this year, three activists tracking illegal loggers were shot dead. Six members of the state security forces were arrested for the crime. They are suspected of trying to cover up their involvement in the illegal timber trade.

In 2012, the well-known environmental activist Chut Wutty was shot under similar circumstances, and numerous other forest rangers have been killed since, without any independent investigations being launched.

Driving down bumpy forest tracks with two armed escorts for safety, it's clear logging is happening — despite a ban on felling protected tree species. Large areas of forest have been replaced by rubber plantations, and tractors continue to drag away piles of timber, unhindered by forest rangers.

Aun Pheap reportedly extensively on illegal logging for Cambodia Daily, a newspaper the government recently shut down. He says poachers are after rosewood, although it's becoming ever-scarcer.

"They have to go deeper and deeper in the in the jungle to find it," Pheap told DW. "In Vietnam, it no longer exists. And in Cambodia, the last rosewood will be cut probably in 2026." 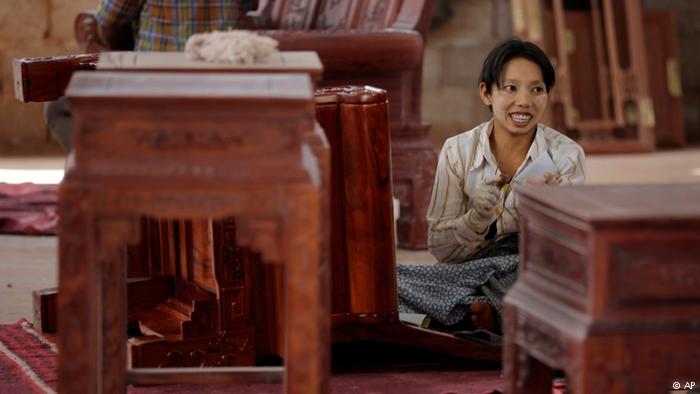 Rosewood is a popular choice for luxury furnishings

Since 2002, it has been illegal to fell the richly hued timber. But its striking color, contrasting grain and waterproof qualities make it highly desirable for furniture and floors. Most of Cambodia's poached rosewood is smuggled across the border to Vietnam and ultimately sold in China.

Following the sound of chainsaws, we find three loggers working deep in the forest. One is a farmer who says he earns barely $500 (€410) each year from his rice paddies. "I know this is illegal, but what can I do?" he says. "I have a large family and we are poor."

He describes how the trio used a microloan to buy a basic tractor, which they use to transport the poached wood. "We work three days for one transport. That brings in $50 dollars. Not much, but it helps."

Rather than policing this illegal activity, poorly paid forest rangers are themselves profiting from it. At a checkpoint on the border of the nature reserve, there is a queue of tractors. The rangers take 10,000 riel — about $2.70 — to let each pass, and the loggers are waved through amicably. 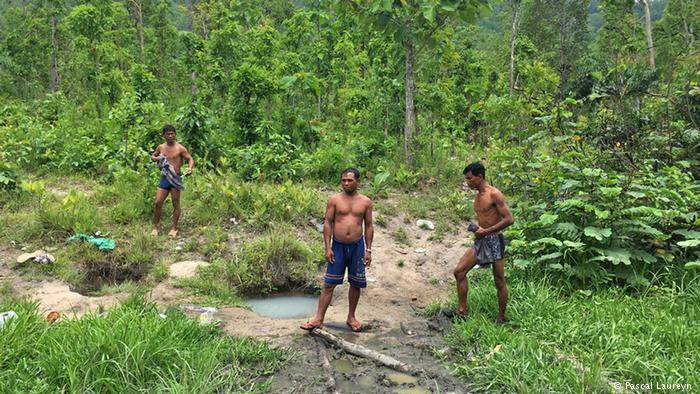 And the corruption goes far beyond rangers topping up their wages.

"Only a few companies have a license to cut wood legally," environmental activist Heng Meng told DW. These companies are allowed to clear certain areas for agriculture — not timber. But activists say that not only are they extending their logging beyond licensed areas, they are also providing cover for the wider black market.

"These companies are owned by people in the army, often in senior positions," Meng says. "The local people cut down trees illegally and sell the wood to the army. The company can then give this wood a legal label."

At the Daun Roath border post in Tbong Khmum province, a small barrier marks the spot where Cambodia ends and Vietnam begins. It's quiet, with just a few chickens making the crossing. A bare-chested border guard sits on a camp bed playing with his smartphone.

"I formally deny that any wood is being smuggled over the border here," he growls, without looking up. "I have never seen anything here. The government shut the smuggling down long ago."

Customers at a food stall on border aren't very communicative either.

"I know nothing, I'm always drunk," a man in his 50s says. But he follows us when we move on. Talking could cost him his job, he says. "I see it happen every night. With vans and luxury cars. A lot of officials. Nobody dares stop those vehicles."

At an army base near Snuol, close to the border, we find stacks of rosewood worth thousands of dollars. A man in military fatigues confirms the logs belong to the army, but says they are destined to prop up plants on a pepper farm.

On highway 7, the main artery from Cambodia into Vietnam, the black market appears to be flourishing, with wood transported on vans, trucks and even motorbikes.

A man in his early 30s is carrying a three-meter tree trunk on the luggage rack of his motorbike. He says he bought the wood from a company licensed for forest clearance and plans to sell it on to a Cambodian contact in Vietnam for 500,000 riel — around $134. The border guards take 5,000riel, or "sometimes I give them a kilogram of meat," he says.

"I have a wife and three young daughters," the man explains. "I don't want to do this forever, but now I have no choice. The border police know that."

Ultimately, the log he's smuggling across to Vietnam could end up with a far higher price tag, as luxury furniture in an upscale European store.

"The European market is inundated with products that contribute to deforestation and land-grabbing," Schipper told DW.

And a new trade agreement currently being negotiated between Vietnam and the European Union could exacerbate the situation, deregulating the movement of goods between the two countries and allowing more illegally logged Cambodian rosewood onto the European market.

"Checks on wood trade should be stipulated in the agreement," Bart Staes, a member of the European Parliament for the Belgian Green Party, told DW.

"We can't allow smuggled wood being imported into the European Union thanks to the simplified procedures of the free trade agreement. It would legitimize and facilitate illegal trade."