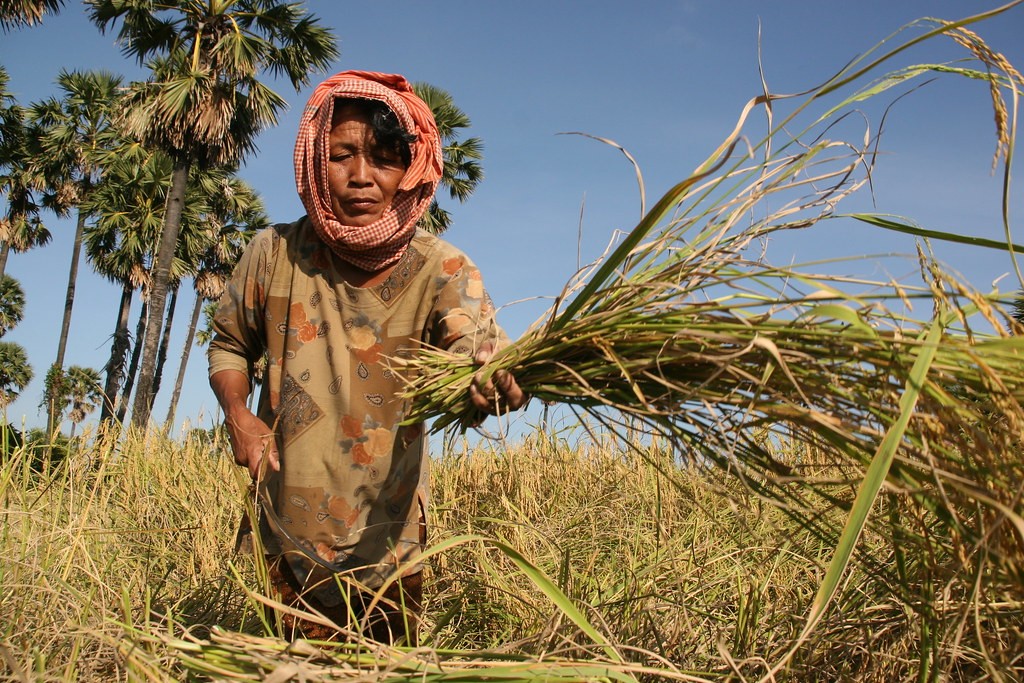 A rice farmer in Cambodia. Using the new MobilES app, farmers will enter data about rainfall, food production, and water quality, which aims to give new information about how to respond to the climate crisis. Image: ILO in Asia and the Pacific, CC BY-SA 2.0 via IFPRI Flickr

Yin Socheat, a 29-year-old Cambodian farmer, is immersed in her smartphone - but it isn’t the latest viral meme she’s looking at.

Instead, it’s the pilot for a new app that she hopes will help secure a better future for herself and her family, as climate change brings wilder weather to Cambodia.

Researchers looking at how to cut deforestation and help farmers adapt to changing conditions usually gather data through on-the-ground surveys in far-flung communities.

That process can be “expensive and time-consuming”, said Nou Keosothea, a director of programme development at Pannasastra University of Cambodia.

The pilot app aims to see whether cheaper mobile phone surveys and the more frequent data they provide can be an improvement, said Simon Willcock, an environmental scientist at Bangor University in Wales.

Such innovations could give scientists and governments “new information about how to respond to the climate crisis”, said the lead researcher of the project.

“The farmers are doing this all on their own… every day,” Willcock said.

The app, developed by Willcock and Keosothea’s universities, as well as the government of Cambodia and New York University, aims to give researchers good-quality data collected at very short intervals - the holy grail of surveying, the researchers said.

Keosothea, who also works for Cambodia’s government as deputy secretary general of its national committee to the UN Economic and Social Commission for Asia and the Pacific, said the data will be passed along to government planners, to help them develop better policies to deal with climate threats such as forest loss.

Willcock said he likes the idea of people using smartphones’ data-gathering abilities as a force to solve problems, suggesting such technology could “make the difference between whether we succeed in tackling climate change or not”.

Underneath a stilt house in the forest community of Tmat Paelly, trainers take a group of 10 farmers seated around a wooden table through the app’s multiple-choice questions.

Farmers using it will be asked to answer dozens of questions a day and hundreds a week, such as “Was your household able to obtain sufficient water to meet its needs last week?” and “What do you estimate the total cost of the drought to be?”

Those who complete the questions have their monthly phone bill paid, and after a year’s participation they will own the smartphone they’re given as part of the project, Willcock said.

An earlier pilot study in Bangladesh found that being able to keep the phone at the end of the study was crucial to persuading participants to agree to complete the daily onslaught of questions, he said.

Kim Net, deputy director of Cambodia’s National Institute of Statistics, said he had initial doubts about whether the system would produce accurate data.

“How do we ensure the quality of the data, if it is not being monitored by trained professionals?” he asked.

But Willcock said a control group of participants, who will be asked the same questions using traditional survey methods, will help address those concerns.

Kim said that if the information proves accurate and useful, it will help fill in gaps in government understanding about climate change-related hazards in Cambodia, as well as food security and ecological changes.

“Through this, we can consider (in) what areas we need to have interventions,” he said.

Those might include adjusting crop planting times to account for later rains, switching from water-intensive rice farming to raising fruit like mangoes, and developing tree plantations to provide firewood.

The data “may give us a better understanding of why people cut down trees”, he said. “Once we understand what is driving this deforestation, the government can act to address it.”

Cambodia has one of the world’s highest rates of forest loss, at 14 percent a year, according to a 2018 NASA Earth Observatory report.

Researchers said they expect the pilot mobile app survey, which began in March with 480 participants, to be completed in 18 months.

After a few hours of training Yin, the farmer from Tmat Paelly, agreed that she will take part in the survey, and not just for the free phone and data.

“We worry that the government doesn’t always know what is happening here on the ground,” she said - something she hopes the app can help change.