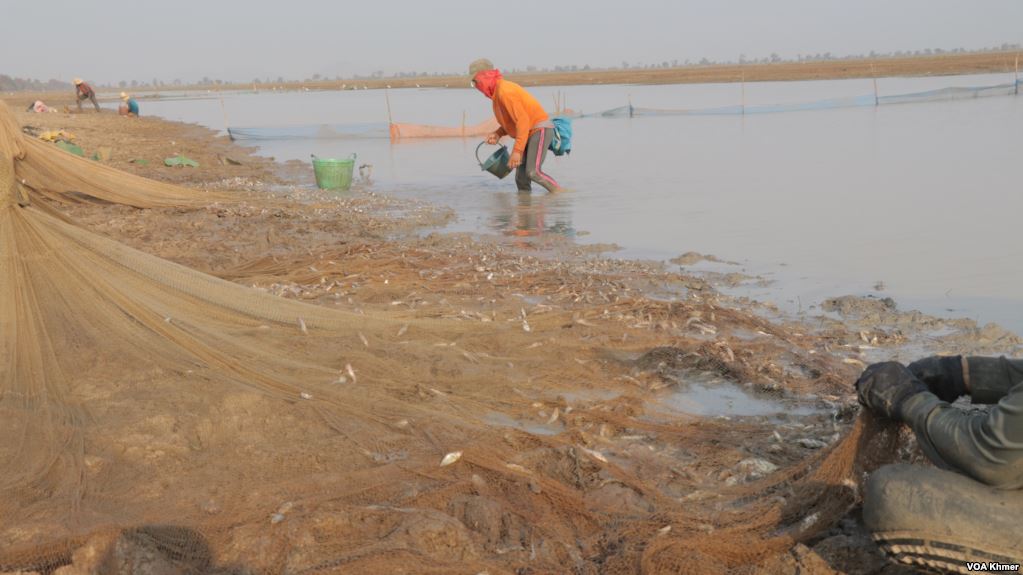 PHNOM SROK DISTRICT, BANTAEY MEANCHEY PROVINCE, CAMBODIA — Built atop the bones of the dead, Trapaing Thmar reservoir is largest irrigation project built by the Khmer Rouge regime. Today, it is running dry amid one of the worst droughts to hit Cambodia in living memory.

In northwestern Cambodia, more than 400 kilometers from Phnom Penh, the vast protected area serves as a crucially important source of water for thousands of rice farmers and their families in Phnom Srok district and other neighboring areas.

Trapaing Thmar reservoir is also the habitat of numerous endangered species, including the Sarus crane, the world’s tallest flying bird.

During a recent visit to the area, farmers were fishing and pumping water to their rice fields from a scattering of small ponds, all that remains of the more than 12,000-hectare reservoir.

In this part of Banteay Meanchey province, farmers remark on the lack of rain, during the wet season as well as the dry season. Cambodian farmers grow rice in both seasons. Cambodia’s rainy season typically arrives in May and ends in October and dry season runs from November until April.

“It is not like before. It is worse than ever,” said Ping Chantrea, a 30-year-old farmer who adds she can no longer produce enough rice to sell.

“It only rained twice during the wet season last year,” she laments from her home in Ponley commune’s Porabun village, a concern echoed by others.

“Early this year until now, it has not rained at all,” said Chantrea who is eight months pregnant.

“I lost the money I saved from my wedding,” she added.

Farmers in this district have complained that production of rice in both rainy and dry seasons has declined.

Another farmer, Laing Thom, says he believes the temperature is rising and the rains are no longer as regular as they once were.

Cambodia has been ranked among the Southeast Asian countries most vulnerable to climate change, according to a report by Asian Development Bank.

Many of Cambodians rely on agriculture, and the changes to the country’s climate lead to more droughts or more floods.

According to UNDP statistics, 22,695 Cambodians out of every million were impacted by natural disasters in the country between 2005 and 2012, especially by flood and drought. Flooding in 2009, 2011 and 2013 led to more than $1 billion in damage and 461 fatalities.

Thom says he cannot produce as much rice on his 2.6-hectare farm.

“I can’t make a profit, or even cover the cost of fertilizer,” he said, complaining of price manipulation. Farmers expect to sell their rice for at least 18 to 20 cents per kilogram, but it has been sold at a lower price.

​Only one rice crop

On Feb. 20, Prime Minister Hun Sen, citing the drought, asked rice farmers to plant only for the wet season harvest.

“Please farm only one crop this year because we do not have enough water,” Hun Sen told thousands of workers in Kandal province, adding that Cambodia will face a severe drought and water shortages this year.

In a directive dated Jan. 17, Hun Sen called on local authorities and villagers to conserve water for crops because Cambodia will likely be indirectly impacted by El Niño, which refers to a short-term period of warm ocean surface temperatures in the Pacific Ocean, stretching from South America towards Australia.

Cambodia will also grapple with soaring temperatures of between 40 and 42 degrees Celsius in April and May.

Lim Kean Hor, minister of water resources and meteorology visited the Trapaing Thmar reservoir area Feb. 23, and told Phnom Srok villagers that by farming during the dry season, they had acted against Hun Sen’s directive.

“They have farmed more than the plan allowed. They were allowed to farm only a total of 5,000 hectares of land,” said the minister, adding “we lack water” until an anticipated break in mid-May.

Drought has now affected more than 20,000 hectares of rice fields in 13 provinces, according to Cambodia’s National Committee for Disaster Management.

In 2015, Cambodia experienced its worst drought in half a century, with most of its 25 provinces experiencing water shortages, and about 2.5 million people severely affected.

Mean Seum, chief of Chantrea’s Porabun village, said an estimated 10 percent of the normal amount of rice will be produced this year.

“Mostly they owe money to microfinance [institutions] and other people,” he said. “The debt will be more.”

“If it is worse like that in the future, parents will migrate to work in Thailand or children will be forced to work,” he added.

“There is no family in this village whose members don’t go to Thailand,” he said, adding that the migrants work in construction or agriculture.

Normally the migrant workers return to help their families with the harvest.

“But they won’t come this year,” he added.

Seum himself has three hectares of land and rents two hectares for farming. But he cannot break even in the current climate, he said.

“People also get angry with each other because some families get water for their rice fields and some don’t,” he added. Families who live closest to Trapaing Thmar are the ones who get the water supply for their crops.

Em Dara, the technical assistant at the Ministry of Water Resources, who oversees the reservoir, said about 5,000 hectares of land have been affected so far.

“It has affected thousands of families,” he said. “Some don’t have water to use now.”

“It has affected species and fish in the reservoir as well. The climate has changed now. It is the worst in 10 years,” he said.

Villagers are also concerned about the impact on fish stocks, which nationwide provide a living for millions of Cambodians and up to 80 percent of all animal protein in the diet.

“There is no water. This year is worse than other years,” said Mea Siz, 58, as he fished at Trapaing Thmar reserve. “I am now concerned about fish here.”

Having land to farm crops, especially rice, is central to the lives of many Cambodians. It is what gives them a sense of security, community and family. Eighty-five percent of Cambodia’s approximately 16 million people depend on subsistence agriculture for their livelihoods.

Despite being aware of the water shortage, farmers in this district say they have decided ignore Hun Sen’s directive and farm through the dry season.

“I could not make do with just the rice farmed during rainy season, so I decided to go ahead in the dry season, but it was not successful,” Chantrea said.

“I thought that the water in the reservoir was enough, but it was not because many farmers have done farming at the same time and the water is insufficient,” she added.

Deu Yuch, another farmer, says the poor farming conditions have led him to fall behind. He reckons he’s about $3,000 in debt.

“I don’t know what to do, but will keep growing rice in the next season,” he said. “We have no choice. We have to take a chance.”

Some parts of the community have been provided water from an irrigation system built by Chinese investors. The water has been transported from nearby provinces Siem Reap and Oddar Meanchey, according to Khut Khuon, Poichar commune chief.

Khut Khuon Poichar says farmers will pray for rain during Choul Chhnam Thmey, the Cambodian New Year, celebrated from April 14 to 16 this year.

“We will ask the Buddha to give rain,” he said.

​As the drought continues to blast the countryside, Chantrea says she is worried that it will get worse and she will not have enough water to farm in the wet season.

“We are farmers, if we don’t do farming, what do we have to eat? So I take a chance with Tevada. I pray to Tevada to bring rain so it will be cold and have water,” Thom said.