ASEAN diplomats renewed their commitment to the United Nations Framework Convention on Climate Change (UNFCCC), the Paris Agreement and COP-15, especially the principle of shared responsibility for responding to climate change, according to a joint statement released by the 55th ASEAN Foreign Ministers' Meeting (AMM) and related meetings hosted by Cambodia.

The ASEAN diplomats also said they were in favour of the ratification of the climate agreement at the United Nations Conference on Climate Change COP-26 in Glasgow, UK.

Their statement goes on to note that ASEAN countries also recognise the importance of enhancing cooperation, such as capacity-building and climate finance by developed countries, for the implementation of the commitments under the Paris Agreement and the Glasgow Climate Pact. 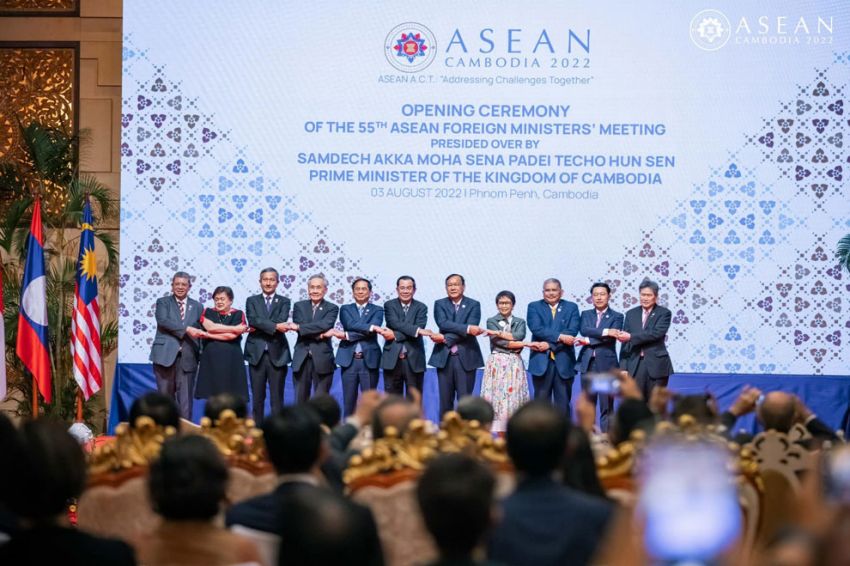 ASEAN foreign ministers cross arms and hold hands for a photo at the opening ceremony of the 55th ASEAN Foreign Ministers’ Meeting in Phnom Penh on August 3. (Photo: Hong Menea)

ASEAN also looks forward to the global efforts to be determined at the UNFCCC (COP-27), which will be held on November 6-18, 2022, in Sharm el-Sheikh, Egypt.

Separately, the government of Cambodia said it was strongly committed to tackling climate change and environmental damage in the region and the world, despite the Kingdom having low greenhouse gas emissions both historically and presently.

Presiding over the opening of the 55th AMM and related meetings in Phnom Penh on August 3, Prime Minister Hun Sen urged the adoption of an ASEAN Green Deal aimed at pushing the ASEAN region to gradually move towards a green future with sustainable, efficient use of resources, resilience, renewable energy and increased economic competitiveness.

Previously in 2020, Cambodia was one of 72 countries to submit an updated report on Cambodia's contribution to the implementation of the United Nations Framework Convention on Climate Change (NDC) to the UNFCCC Secretariat and did so ahead of schedule.

In 2021, Cambodia then submitted its Long-term Strategy for Carbon Neutrality (LTS4CN) to outline its long-term vision for elimination of carbon emissions in response to global climate change, with the intention of achieving zero emissions for the Kingdom by 2050.

When the strategy was published in February, Minister of Environment Say Sam Al said that Cambodia was just the second of the least-developed countries in the world and the second country in ASEAN to formulate a strategy to reach zero carbon emissions by 2050.

He said that the heart of the strategy consists of four key areas – forest management, reducing emissions from the energy and transport sectors and ensuring energy efficiency, as well as developing green agriculture.

Cambodia’s government has also stated that further evidence that it was strongly committed to tackling climate change was its incorporation of 13 green and climate initiatives into its post-Covid-19 development and economic recovery strategy.